Roars and show! Etna crosses the record line of 14 paroxysms in a month, still following the sequence of strong explosions. It all began on February 16th, 2021, and continued, constantly, at the rate of one event every two days.

Paroxysm umber 14 arrives on the night of March 17th, with a surge of volcanic tremor around midnight and the start of the explosive signals around 2 am. As usual, very high lava fountains have been created. Plus a copious cloud of ash and lapilli that this time the wind has pushed south (Acireale, Aci Sant’Antonio, Pedara, Mascalucia, Viagrande, Valverde, Catania) and several streams of lava. 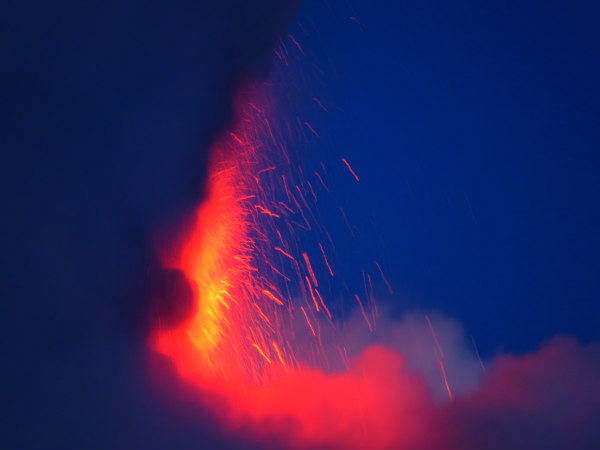 Loud roars went on for hours

The lava poured into the deserted Valle del Bove as usual without any damage to property or population.

The roars that woke up the whole Catania coast were very strong and continued until 8 in the morning. People, frightened by the intensity, also reported “seismic shocks” . But it probably was just air displacements caused by the power of the rumblings themselves. No damage, as usual, but just an incredible show that is enriched with beautiful colors at the first light of the morning.

The INGV institute immediately proceeded to issue unofficial press releases to reassure the population who began to fill the social networks with worried comments. It was nothing extraordinary, just a lot of noise for yet another show of this incredible volcano. (photo by G. Musumeci)