A big volcano such as Mt.Etna has always inspired fear and respect. It does not sound strange, then, that the people keep on handing down myths and legends written by ancient men who tried to explain the frightening phenomena of the earth. Many stories have been told about this volcano and we want you to come and discover them with us, by visiting the places where they were set.

Mt. Etna and the Ancient Myths

Even the Greeks told mythological tales about Mt.Etna and they have come to the present day. The tale of Hephaestus’ Forge, for example, is one of them. According to the myth, Hephaestus was thrown out of Mount Olympus after a bad argument with Jupiter. He literally fell on a lovely island, creating a deep hole into a high mountain. He then decided to use that mountain as his blacksmith forge, and that is why Etna now explodes with fire sparks!

Another Greek myth is related to the giant Tipheus. His punishment for having challenged Jupiter was being tied hand and foot and condemned to support Sicily forever: his feet would be on the Cape Lilibeo, his right arm was tied to the Cape Faro or Peloro and the left arm, below , on the Cape Passero. His head lied under Mt. Etna, so when the volcano rumbles and throws off fire it is actually the protest of Tipheus you are hearing.

Everyone knows the story of the shepherd boy Acis in love with the marine nymph Galatea. The two lovers were opposed by the Cyclop Polyphemus who, in order to have the beautiful girl all for himself, killed Acis by throwing against him huge boulders. Polyphemus is actually Mt.Etna, its only eye represents in fact the red glow of the crater, and every so often, like then, it still launches huge dangerous stones in the air.

In more recent times new legends have developed, linked however to the shapes of certain rocks, to events or eruptions. Like the story of the Pious Brothers (this is how are called two twin hornitos located on the north side of the volcano): legend has it that these were once two young brothers who, caught at high altitude by a terrible eruption, decided to face the lava and to save their own elderly parents. 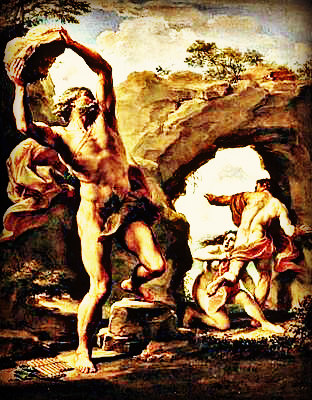 Once loaded with the weight of their parents, however, they could no longer run and the lava had almost reached them along the way towards the valley. The young men then fell on their knees and pleaded with the gods and, miraculously, the lava split into two arms, sparing them and creating a safe island on which the family awaited for the end of the eruption.

Another legend is linked to Queen Elizabeth I of England. According to a strange narration, after her death the British sovereign was thrown into hell through the craters of Etna. It was the devil himself who dragged her along that way, but he didn’t notice that during the flight one of the slippers worn by Elizabeth had fallen and had been lost “somewhere in Bronte”. Two centuries later, in 1799, when Admiral Nelson received the property of the castle of Maniace as a gift, one night he saw a mysterious lady – the ghost of the queen – who gave him a casket. Inside was the famous slipper that is now said to be kept somewhere in the palace of Bronte.

Customs Related to the Myth

Among the customs still in use on the volcano, one is particularly moving. The peasants who live on its flanks still believe that Mt. Etna is a living being, a mother or a father, that can be appeased when it is angry. For this reason, if an eruption gets too close to a house or a town, some people leave the kitchen table with a bottle of good wine on it, before escaping. It is still believed that Etna, by appreciating the gift, will spare the house. It may seem strange but … it usually happens just like that!