When newspapers and television did not exist and when schools and books were the privilege of a few people only, history was told  by “storytellers”. These artists told by singing facts and events that occurred over time, along with the heroic deeds of knights and kings. Sometimes they were accompanied by puppets or actors, other times only by hand-painted pictures. The Puppets Theatre was born in Sicily in order to spread the heroic deeds of the Norman Christian Knights who regained control after the Muslim conquest of the island, in year 1000.

We know the Puppets Theatre already existed in Sicily in the 17th century, although the first authentic evidence dates back to the 18th century. In the 19th century this genre of  represented narration also arrived in Naples and in 2008 it was declared part of the UN Intangible Heritage. It is not necessary to have a theater, even if by now the major companies do own one, almost all of them. You  just need a set where the puppeteer can work.

How Do You Stage the Puppets Theatre?

To put on a show of  Puppets Theatre you need to have the puppets first. Some characters are standard, obligatory like Roland, that is: the hero. He usually dresses in golden armour and red clothes; then we have Rinald, Roger and the Saracen and enemy of the Christians, Ferraud. In some theaters there is also a female puppet knight: Bradamante. 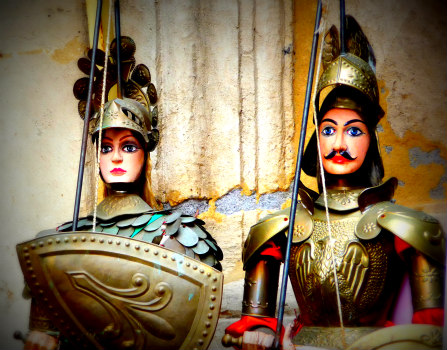 To start the show you need: a stage visible to the public and a structure, behind the scenes, on which the puppeteer can stand while maneuvering the puppets – thanks to iron rods and rough strings. The structure must always be made of wood because the puppeteer, with his own shoes, will also produce the “battle’s noise”.

The puppets wear finely decorated tin armours and hand-made clothes and feathers fixed to the puppet’s structure, almost always made of wood with some parts of fabric filled with sand. In some Puppets traditions the faces of the characters are made of hand-painted papier-mâché. The hair and beards of the puppets  are mainly made with  real human hair and beards!

The Schools of the Puppets Theatre

The puppets are not the same everywhere. In Sicily there are two main schools of Puppets Theatre, a  western one (Palermo) and one in Catania. The Palermo puppets are small, totally articulated, with arms and legs that can fold and are easy to maneuver. The Alcamo puppets also belong to this school.

The Catania school instead has very large puppets, as tall as a human leg, with stiff knees. The puppets of Syracuse and Caltagirone belong to this school. An exception are the puppets of Acireale, which are as rigid as those of Catania but small in size as those of Palermo.

The plots of the theatres usually refer to the epic poems of Roland, written by Ludovico Ariosto in 1516, Freed Jerusalem by Torquato Tasso and to the History of the Paladins of France by Giusto Lodico (19th  century). The stories are not entirely faithful to the originals because they have been changed and enriched over time by the oral tradition.
Some particularities have been added thanks to the imagination of puppeteers, such as the “dancing battle” in which the knights clash fiercely in a fight that seems a real dance, conceived for the first time by the puppeteers Munna of Monreale.