Volcanologists followed the event with the same amazement as citizens crowded into street corners, armed with cell phones and cameras. Mount Etna gives everyone the show of its first paroxysm of 2022, on the afternoon of 10th February. An absolute spectacle, such as has not been seen for almost 20 months. Above all, a show that was not foreseen. 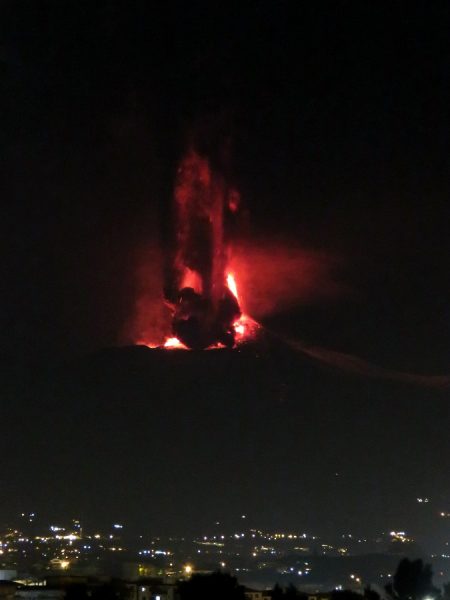 The volcanic tremor had been rising and falling for a few days, there had also been dress rehearsals in recent weeks. But then everything returned to normal. Important changes were also recorded on the morning of 10 February, but nothing suggested so much energy.

At about 6 pm, as the sun went down,  the lava fountains from the usual South East crater were spotted. By 7 pm they had already become a single large Strombolian fountain. But the best was yet to come. Between 10pm and 11pm, Etna “broke its banks”. The lava fountains have risen to almost 1000 meters in height … throwing huge boulders of fire at considerable distances.

The wind blew the ashes west before turning southeast as a copious lava flow descended on the volcano’s western flank. Powerful roars were heard between Catania and Enna and lightning bolts were also generated between the fumes and the fire, such was the power released. The phenomenon began to subside only after 11pm.

What happened at the top?

We will have to wait until tomorrow to understand what happened. Many have also seen two or three distinct fountains and have noticed important cracks on the flanks of the South East. The dense black cloud that at times covers the eruption currently prevents us from understanding the extent of today’s eruptive phenomenon. We will update as soon as the INGV has recorded all the data (PHOTOS BY GRAZIA MUSUMECI)