You will meet them for sure, on Mount Etna. But do not be scared, since they are not dangerous. Not all of them, anyway. We are talking about snakes, which are a very common animal to see on the Sicilian volcano and very useful for the balance of the natural environment. You do not have to fear them, unless they are vipers. That is why it is important to know them, to understand the difference of one and the other, before you start exploring Etna. You better go with an expert local guide, always.  Especially in the summer.

The Viper of Etna

Vipera Aspis Hugy Sching (side photo by Bighunter.it) is the kind of viper snake that has settled on Mount Etna. This is the only poisonous snake on the volcano, so you better learn how

to recognize it among other reptiles. Viper is 70 centimetres long. It has a big heart-shaped  head,  very evident compared to the rest of the body. The muzzle is pointed upwards.

The viper’s body is usually dark, with black stains all over it – and three to five of them are very close to the tail. It also has an upside-down “V” behind its neck. The poison is strong and dangerous, you can only  eliminate it with the antidote. In order to protect yourself from the viper’s bite, when you walk on Mount Etna in the summer, make sure to wear: mountain shoes, thick socks and long trousers. Make noise with a stick all around, as you go.

The snake Biacco (Hierophis Viridiflavus) is very long, even up to 2 metres. At first glance it can be confused with the viper because it has a very similar head. But the length is certainly different. It is a very aggressive snake, it can bite but is not  poisonous at all. 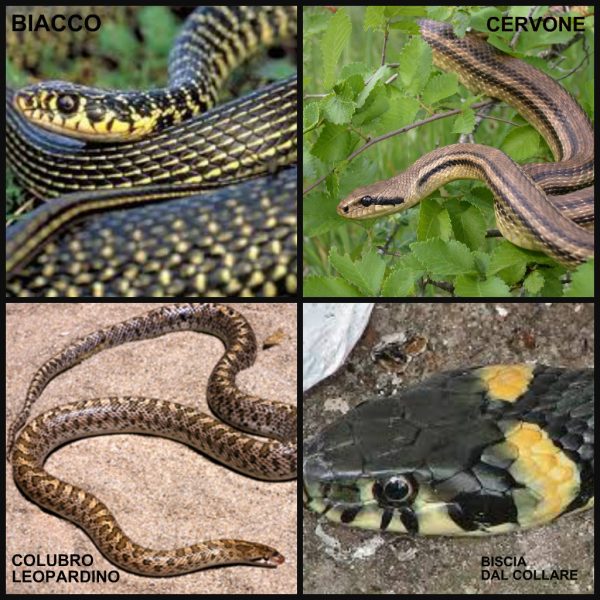 The Elaphe is also called Cervone snake, in Italy. It is between 90cm and 2 metres long, depending on age. It has a dark colour on the back with yellowish belly. His “fellow mate” Zamenis-Colubro Leopardino has a yellow coat with brown or reddish leopard spots all over it. It measures circa 90 cm. Both of these snakes are absolutely harmless to humans, not aggressive and have no poison.

Natrix Natrix is also called “collar snake”, Biscia dal Collare. It is often confused with the viper, without justification since it is very different, instead. One metre long, with a dark back, it has coloured “rings”  – usually yellow and black – around the neck, hence the name. The belly is white, the head distinct from the body.  It is not at all poisonous or in any way dangerous for humans.

Other reptiles and lizards

Don’t confuse snakes with Saurians, that is hybrids between those reptiles and lizards. The Saurians  are longer than average lizards, with very short legs, so they are often mistaken for small snakes. Even if this mistake happens, don’t be frightened, because they are not absolutely dangerous. In any case, they can be recognized by their size, never exceeding 30 cm.