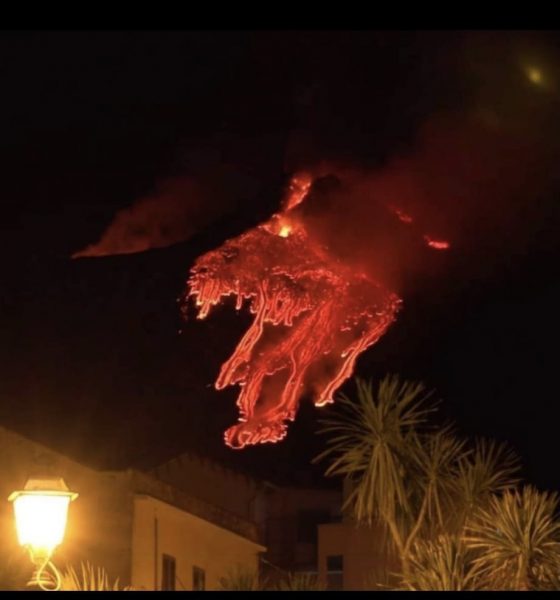 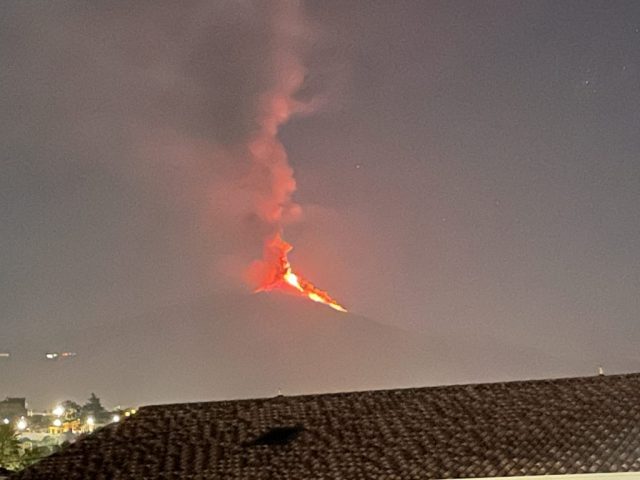 Without brakes, but with a now constant pace, Mount Etna continues its  daily eruptions. In the late evening of today, Monday 22 February 2021, the volcano thunders again in the dark. The INGV press release brings the time of 22:56 when it informs everyone that:

“there is an increase in frequency and intensity of Strombolian activity at the South East Crater, with the launch of products abundantly outside the crater rim. From about 21:10 UTC the average amplitude of the volcanic tremor shows a sudden further increase. At present the amplitude is within the high level.

The source of the tremor shows a gradual shift towards the SE Crater, at a depth of 2500 m above sea level. Infrasonic activity is significantly increased with a high rate of occurrence of infrasonic transients. These are located in correspondence with the SE Crater ”

During the day yesterday, the rumor spread through the News that the magma erupted by the volcano was “rare, primitive type”. Volcanologists have patiently explained that the term “primitive” is purely scientific . It indicates, on the contrary, a new and lively magma. This could give such eruptive spectacles for a long time to come. However, there is nothing so “rare”. Similar paroxysms, and with equal frequency, are not new to Etna: it has manifested them dozens of times in the past. Just recall the continuing crises of 2000 and the most recent of 2013.

The tremor rose already in the morning of February 20th but reached its maximum peak at around 10 pm. The lava fountains started about an hour later, increasing in intensity and height over the course of the night. A very powerful and particularly spectacular one was recorded at around 2:15 am , with an estimated height of almost a kilometer!

Spectacular and impressive is the vision of four eruptive holes all located inside the main crater South East, which made the eruption truly look as a “choral concert”. This time too, there was a significant fallout of ash and lapilli which, however, mostly affected the western towns.

What leaves you speechless, in addition to the spectacularity of these paroxysms, is also the almost Swiss punctuality with which they occur. Many speak of the “30-hour rule”, as if the volcano knew it had to erupt within those set time intervals. And in fact … that’s what it does! At the Institute, work never stops, many volcanologists have not been resting for days. Because Etna always takes you by surprise. And even if now it seems to have finished… tomorrow is a whole new story to rewrite.

Etna gives no respite, and does not seem to have any itself. At 9 am on February 19, the volcano becomes restless to the point that the Institute of Volcanology immediately goes into alert. The signals are initially almost harmless … a few snorts, dancing tremors. Then everything suddenly increases, as is now “tradition”. At around 10.15 the explosions at high altitude – the South East Crater always protagonist – become powerful and a gigantic ash and lapilli mushroom-shaped cloud begins to rise.

Behind it the lava fountains are very high and accompanied by continuous roars (video here) that really sound like the roar of a dragon! Immediately afterwards the lava streams come out, the longest of which descends on the north-east side. Like the previous ones it runs aground in Valle del Bove after having traveled several meters in steep slope.

In recent days, between one paroxysm and another, the volcanic tremor curve has followed an anomalous trend. Oscillations worthy of a seismograph  do not let us understand the “intentions” of Etna. However, the monitoring work of volcanologists continues incessantly and extremely efficient. The updates will continue to check how the situation evolves, which at the moment does not seem destined to calm down yet.

We remember that Etna is always active and lively, but that in the last two years it has manifested a radical change that is expressed with these surprising and fascinating eruptive phenomena. Currently, three major paroxysms have occurred in a week, a completely new style that ignites the interest and passion of professionals … and not.

It was a night of fire! Yet yesterday it all seemed to be over. “She is giving us only a break” …. the volcanologists of Catania had said, however, describing the apparent state of calm of “Mamma Etna”, after an amazing and powerful eruption. Indeed, a paroxysm, as it is called scientifically. In the afternoon of February 16th, in fact, the volcano had emitted very high columns of ash and two long lava streams that had poured into the Valle del Bove. The phenomenon had lasted a few hours, from 4 to 6 pm and in the evening the lava even seemed to have died out.

A new phase in the night

On the following 17th February the volcano did not show particular signs , except for some isolated explosion always from the South East crater – the absolute protagonist of these events. But if the people, still  sweeping ash and lapilli, believed that peace had returned, the sceintists of the Institute of Volcanology of Catania spoke of a “pause”.

Etna still had so much to say. And it demonstrated it in the night between 17th and 18th February, precisely between midnight and 3 am. Increased tremor, violent explosions with lava fountains that reached  700 meters height and two large streams of incandescent lava. The largest headed south-east, entering the Valle del Bove as usual. The other, a smaller one, instead headed south-west, stranded in a flat area at the foot of the Sella Crater.

The great eruption of Mount Etna, which had been expected for over a year, began at 4 pm on February 16th, 2021. First,  a small lava overflow from the South East crater (SEC) and a significant increase in tremor. Then, in just less than two hours, alert levels have risen. At about 5:10 pm, very violent explosions made the slopes of the volcano and the foothills vibrate.

Shortly after, columns of smoke, steam and ash rose from the SEC-NSEC complex. At the same time a large amount of material collapsed down, towards Valle del Bove. From the fractures opened with the explosions, several lava streams came out in a few seconds. Two of the largest immediately reached the bottom of the valley that opens onto the eastern flank of Etna. 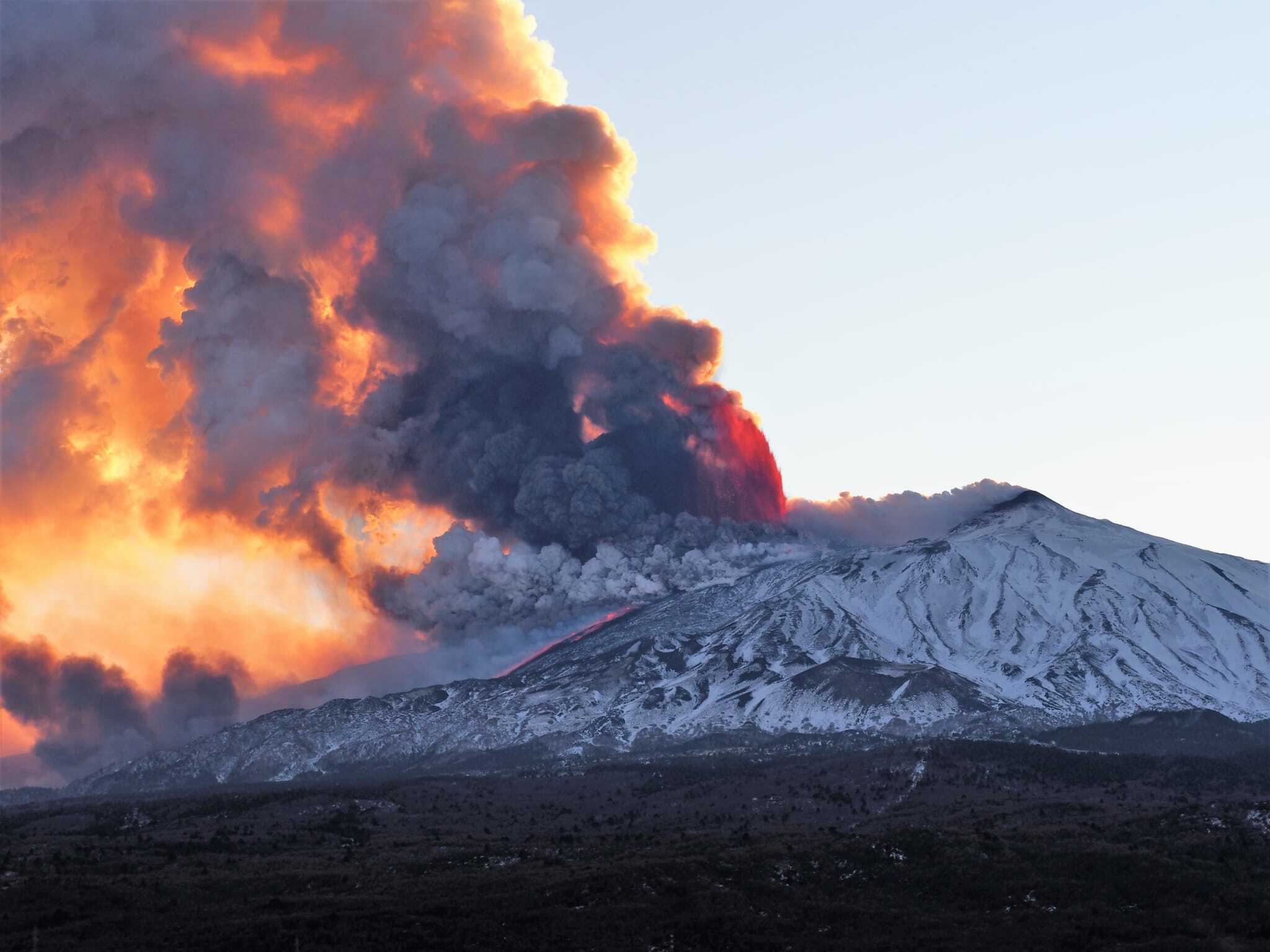 The strange eruption that has been characterizing Mount Etna’s activity for one year and three months continues uninterruptedly. By now the population has got used to that flaming eye that gushes far away every evening, with increasing energy. The protagonist is almost always the South East Crater , but in fact all the summit craters are in full swing. New South East, North East, Voragine, Bocca Nuova… the magma fills all the ducts. Etna is literally as full as an egg!

The news, as Dr. Behncke of the National Institute of Geophysics and Volcanology of Catania reveals to us, is that behind the visible spectacle there is another one we cannot see. But the instruments, the thermal cameras and the secret eyes of volcanologists do see it. Inside each crater, new small craters are forming. Cones stand up where previously there were isolated holes. The Sella Crater, formed between the South East and the New South East craters  -and collapsed last month- is creating yet another cone.

“The vents active at this moment inside the summit craters are no less than twelve” says Boris Behncke, on duty at the INGV and watching this wonderful show “each hole gradually transforms into a new crater and in the meantime more holes will open “. A truly unique phenomenon that, as the volcanologist himself says, “I had never seen before, in my thirty-year career!”

The strange thing is not the continuous opening of many small mouths, but the fact that these are in activity at the same time. And not only that. In addition to them, all the summit craters are active at the same time. A fury that is unusual even for a super active volcano like Mount Etna. It looks as if the mountain is trying to change its face and is in a hurry to do so, too.

This eruption is certainly new, and it is yet another surprise that Etna reserves for its inhabitants and for those who study it for a profession. In fact, scientists have long been waiting for a lateral eruption which, according to the signals, promises to be a possible event. The volcano on the other hand is full “to the brim”. Yet once again it upsets plans and forecasts and creates something different. Unexpected. All you can do is keep monitoring and enjoying the show.  And keep hoping that the “final surprise” is not too dangerous.

(the photo above the title is by Maria Liotta)