Despite being an always active volcano and always ready to show off its eruptions, Mount Etna  now seems to have taken a strange “acceleration”. Restless since 2019, lively in 2020, from January 2021 it began to trigger eruptive episodes with a very particular frequency. First, it was a paroxysm every 24 hours, then the interval became larger. Sometimes it erupts every two or three days, but increases the power of the episodes. People begin to look at the volcano with a new fear. What happens on Etna?

The eruptive phases of Mount Etna

After the 2018 earthquake that somewhat triggered this new lively phase of Etna, the experts of the INGV of Catania held numerous conferences to explain what was changing on the volcano. According to their studies, Etna follows almost cyclic “eruptive phases”, which recur every ten or twenty years. For a decade the volcano erupts from the top, with effusive and all in all calm episodes. Then it begins to erupt explosively, with the lava often looking for alternative routes to the summit craters . After that maybe it goes back to another decade of relative quiet and so on.

For some time there were signs that Mount Etna, after the “quiet” period of 2005-2015, was about to change its register again. Therefore these violent paroxysmal manifestations had long been expected. Perhaps, however, they did not expect them to be so frequent in the span of a few months. And since the lateral rash cannot be ruled out yet, how can you explain the situation to the people without creating panic? 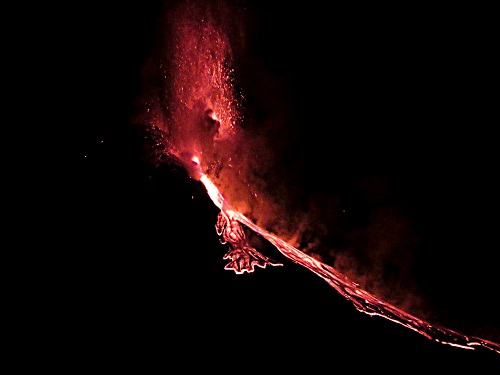 Paroxysms should not worry

Violent and frequent paroxysms should not worry anyway. Because they are an outlet of energy from the summit craters that allows the volcano to expel gas and material. Otherwise, this would cause internal pressure and split the flank even at low altitudes. In short, as long as the summit paroxysms continue, perhaps we are safe from lateral fractures and earthquakes.

Among other things, these paroxysms expel the so-called “primitive magma”. Which is not a bad thing. It only means that the magma remains virtually unchanged from when it is sucked up to when it is ejected from the volcano. A rapidly rising magma does not stagnate, does not seek other ways out and therefore eliminates the danger of low-altitude fractures. At least for now. However, Etna is always unpredictable.

Paroxysms, a spectacle of nature

Between 12 and 15 March 2021, Etna produced the twelfth and thirteenth paroxysms since the beginning of the new phase. Whether they happen during the day or in the night, they are always a fascinating and impressive natural spectacle. The columns of gas and ash, which even reached 12 km in height, were photographed from all over Sicily and Calabria. As well as the very high lava fountains and flows, which arrived and ran aground without problems in  the Valle del Bove desert.

Apart from the discomfort caused by the fallout of lapilli and black sand,  there are no real dangers for the population. Still there could be damage to agriculture and houses’ gutters. But usually the winds that constantly change in altitude make sure that the problem is “well divided” over the entire area of ??the volcano.

Shall the people worry? Not that much. Just follow the beauty of nature, have a lot of patience and reassure yourself with the press releases and the careful scientific explanations of our good volcanologists . Doctors Stefano Branca, Marco Neri, Boris Behncke – just to  name some among so many – are also available on their facebook profiles.
(THE PHOTOS ARE BY G.MUSUMECI)