Home Blog Etna, side fracture and eruption in 24 hours

In the late evening of December 13th, the inhabitants of the Ionian coast noticed strange flashes in the heart of Valley del Bove. When the INGV volcanologists were alerted, an effusive vent was discovered that suddenly opened at a low altitude (2000 meters), with the emission of lava but not gas. The statement reads: 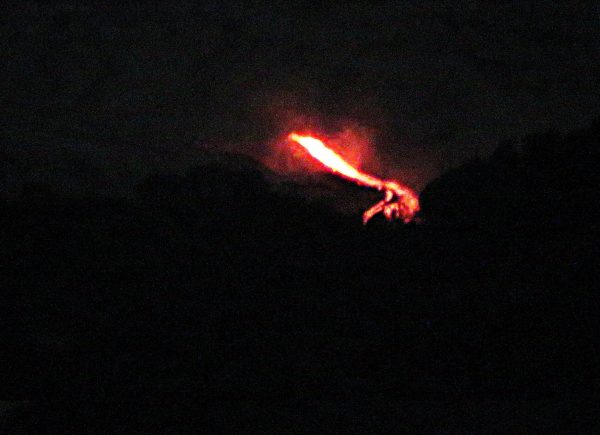 The National Institute of Geophysics and Volcanology, Etnean Observatory, reports that from around 16:30 UTC a weak intra-crater Strombolian activity is observed from the SE crater. From 17:05 UTC the analysis of the images of the video surveillance cameras show ** the opening of an effusive vent at the base of the western wall of the Valle del Bove at an estimated altitude between 2200 and 2100 m asl **, from which it is emitted a small lava flow. Further updates will follow.

During the night and during the morning of December 14, the fracture seems to decrease the eruptive flow and the absence of internal thrust leads, fortunately, to avert – at least for now – the start of a dangerous lateral eruption. But the volcano is still restless. From 11 a copious emission of ash and lapilli begins from the South East which continues, heading towards Catania, until about 18:30. The phenomena both fall on the evening of December 14, but the tremor remains fluctuating. Etna has not yet ceased to amaze. (photos by G Musumeci)