The last weird eruption of Mount Etna ended like that … suddenly, on June 12th. Exactly one month after its beginning, on 12th May. Then, the north flank of the South East Crater split in several places, letting out a long lava flow. “Weird” eruption not because it was unexpected or anomalous but because the South East is one of the most active and lively craters. Therefore it did not seem possible that it would split further, already having so much vent at the top. But Etna likes to “experiment” and has done so again this time, under the fascinated eyes of tourists and volcanologists.

The last eruption and the split flank 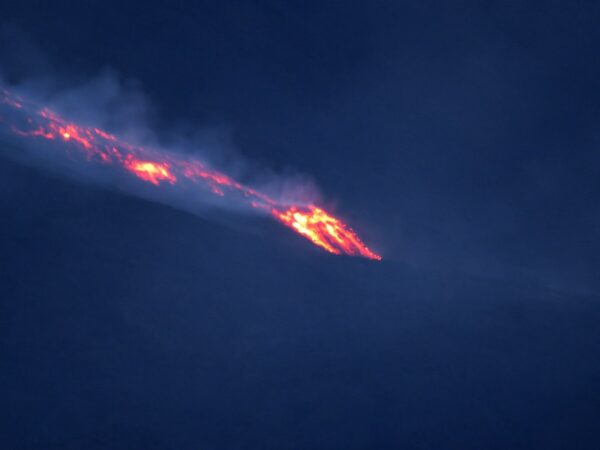 “This eruption was interesting” says Dr. Boris Behncke of the INGV of Catania “Because it started as a summit eruption, then became sub-terminal and finally almost lateral”. In detail, his colleague, Dr. Marco Neri, completes the story: “A few days later, the rift at the base of the South East ‘doubled’, further elongating in the north-east direction. It fed two emerging flows, in particular, from two mouths located between 1720 m and 1850 meters above sea level”.

The lava flow reached and passed Valle del Leone and entered Valle del Bove coming down from the north. But that wasn’t all. Along the entire line of the lava, new fractures did gradually open up. To be exact, it is a system of fractures that descends for 4 km and from which other eruptive vents have emerged. Fortunately, very little lava came out of these.

Both volcanologists point out an important fact. Normally, when many fractures open, there is a notable seismic activity that heralds them. In this case, the surface of the volcano split in several places without earthquakes. This is because the east side of Etna – for millennia – has tended to slide towards the sea. And it does it sometimes abruptly, other times lightly. In this case there was an autonomous sliding, that is not due to the thrust of the magma. The magma, on the other hand, emerged because it found the way out thanks to the cracks that were generated naturally.

Only a great show or also danger?

It was a spectacular eruption, then. Tourists enjoyed it from the lookout points, from the paths, from 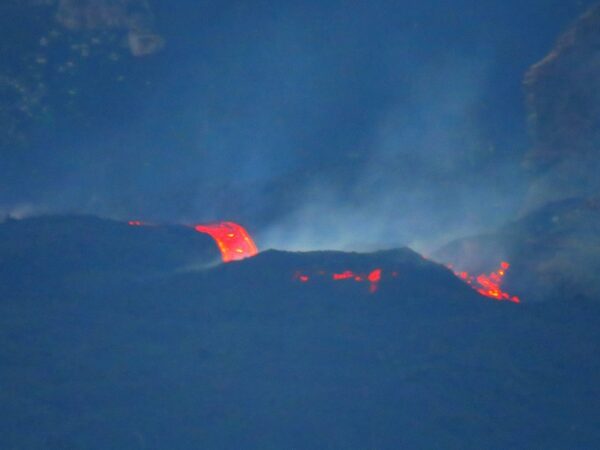 the outlets in Valle del Bove. Some autonomous and reckless explorers have even managed to reach the lava fronts and feel the heat of the fire in their faces! However, they took a risk.

Because if it is true that an effusive eruption like this is almost never dangerous, it is also true that the ground was cracking all around. And no one could know when and where. Among other things, the South East cone – now heavily damaged – could collapse at any moment creating pyroclastic flows which, for those who walk in Valle del Bove, would be fatal.

The last eruption of Etna never constituted a danger for the towns, in the sense that the lava could never reach the inhabited centers from that position. But if the fractures had continued, perhaps the worst would have been feared.

And after the last eruption …?

Now the eruption is over. So what is expected? According to volcanologists, Etna has entered one of its most “lively” periods, which are repeated every ten or twenty years. This means that it could erupt often and at any time, and in unpredictable ways. The current eruption has ended, but – for example – the subterranean tremor still remains at medium levels.

This is a sign that the volcano is about to enter a phase of calm. Or that, on the contrary, it’s just recharging energy before starting a new show. The powerful means of the INGV can only follow its “movements” and understand in time where a new eruption will begin. But they still can’t figure out when. We’ll see!

In the meantime, there is a lot of disappointment among the tourists who flocked and arrived just one day after the end of the event. But don’t worry! Etna never lets you down. No lava at the moment, but many wonderful places to know, to visit, to love and take with you in memory. (photos by G.MUSUMECI)

The most dangerous volcano in Sicily is …

Eruption update: Etna keeps on breaking on the east side