On January 18th around 9:30 pm Mt. Etna surprises everyone once again and kicks off yet another unexpected paroxysm. Or rather, the volcanologists knew it would come, but the people did not. It all seemed relatively calm, with the South East crater which – after so many days of Strombolian emissions – looked meek tonight. Instead it was only the stillness that, this time, precedes the storm. 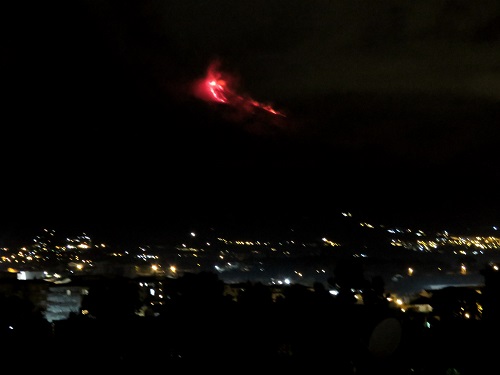 The tremor increased dramatically in a short time. Despite the clouds covering the top of the volcano, a red glare made everyone understand that something was happening. The first explosions arrived around 9:30 pm, then the real show started, with very high lava fountains.

The South East crater and its new derivations (Sella crater, new South Eastern mouth and other minor cones) played the leading role, with the most powerful paroxysm. But what is a little surprising is that the other large summit craters also participated: Voragine and Bocca Nuova in particular. A true “choral” eruption.

After the paroxysm, the lava flows

After the furious paroxysm, several very fast lava flows poured into the Valle del Bove. There are at least four rivers of fire. They started from the South East and descended in an east /north-east 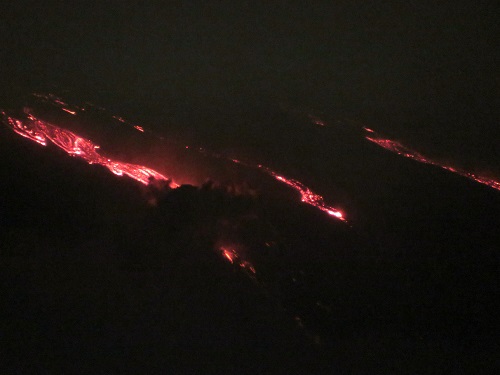 direction into the desert basin overlooking the Ionian coast.

At around 11 pm the explosive phenomena, accompanied by roars and emission of ash, ended. There remain the rapidly descending lava rivers although these too are now in the process of being extinguished.

With this episode, the long eruptive phase of Etna – which began at alternating periods since December 2019 – seems to be seeking yet another new turning point. Only the next few months will tell us in which direction. Paroxysms are no longer a new expression, but almost a constant that repeats itself from time to time. (all photos by G.Musumeci)