Mount Etna often changes style and modality of manifestation of its volcanic phenomena and therefore should not surprise yet another revolution. But it is surprising, indeed, because it is still not possible to interpret. Really this volcano sometimes seems “alive and reasoning”, with a decision-making autonomy that displaces everyone. Back in activity a few weeks ago, after two months of unusual silence, he alternated small explosive phases with real paroxysms. Unlike in the past, however, everything happens with an insane frequency: every 24 hours, every 12 hours …!

The strange eruption of 25 and 26 May

On the evening of May 25, after having already had two minor paroxysms in the previous days, Etna began a timid explosive activity which, however, was exhausted in less than an hour. As if it were looking for new experiments, the volcano “tried again” in the night – around 5 am – and then around 9 the next day. All “failed” attempts. 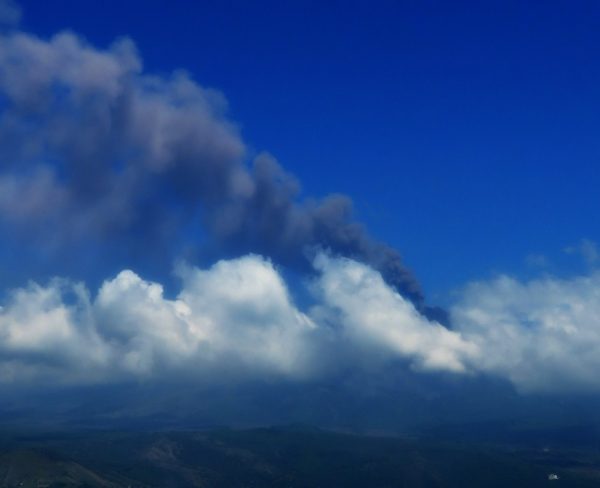 The tremor rose sharply again around 11 but only at 1pm did a paroxysm develop, accompanied by violent roars and a column of ash that poured on the Milo-Riposto belt. Immediately after the tremor went down and it seemed all over. But it was back up and started again with the explosions, for a short time, around 2 pm.

“It hasn’t finished yet,  hasn’t decided what to do” say the volcanologists through the popular Dr. Boris Behncke. In fact, the values have not increased or decreased.

It seems that Etna is waiting for something, as if it is studying what to do. But what is this all going to develop ? As usual we cannot know. We have to limit ourselves only to following the mysterious evolutions of one of the most incredible volcanoes on Earth. A scientific mystery still far from being resolved.

After 24 hours of real “volcanic madness”, everything now seems stabilized but it’s not over yet. It will be understood only in the next few hours if the event that is being prepared will be a great “final show” or just another chapter in the eternal saga! (photos by Grazia Musumeci)