New Year’s Eve is just a few days away and the sparkling wine is already chilled in the fridge. But for once try to go beyond the traditions and … toast the new year with something different. Like, for example, a liqueur from Mount Etna. The area around the great Sicilian volcano has always been famous for its wines, among which there are also several classy sparkling wines. But here they also produce various delicacies derived directly from citrus fruits or from the fruit of the local fields. And therefore liqueurs, bitters and even some strong and mysterious drinks, to be discovered with curious tastings.

It takes very little to ignite incredible goodness on New Year’s Eve. All you need is sugar, agricultural alcohol and citrus peel, knowing how to mix them well together, knowing when to let them ferment … and in a few steps you have bottles full of precious golden, orange or rosé liquids. These are the liqueurs derived from the citrus fruits of Etna, almost always limoncello, arancello and mandarino. They are an undisputed symbol of Sicilian taste and in particular of the land of Catania. Nourished by the rich soil of the volcano, the citrus fruits here have a very strong scent and flavour. And if worked properly, they become delicious ways to greet the New Year. Absolute protagonists: Primo Fiore lemons, Tarocco oranges, Marzola tangerines.

If you don’t like citrus fruits, or if you want to taste something different but always typically Etnean, look for the liqueurs made from Etna apples, pears, mulberries, prickly pears and strawberries. These are a recent novelty in the panorama of Etna liqueur productions, but they are making their mark on the market. In particular, the prickly pear liqueur and the apple liqueur preserve the rich and very authentic flavours of the area. Using the infusion obtained from the apples Delizie dell’Etna, a delicate liqueur with character is obtained. The prickly pears of Santa Maria di Licodia are the protagonists of the liqueurs of the same name. To obtain the mulberry liqueur, the juicy berries are harvested on Monte Arso, in Ragalna, on the southern side of the volcano. Flavours not to be missed, especially on the last magical night of the year. 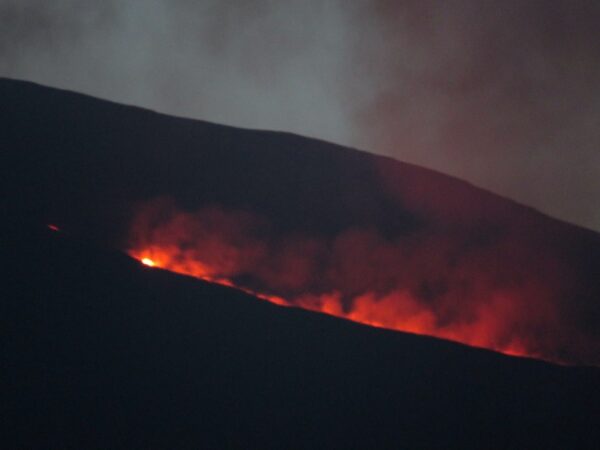 There is a mysterious and delicious liqueur on Etna that we won’t tell you about. Instead, we invite you to taste it, maintaining the mystery that characterizes it. It has the bright red color of boiling lava and even the taste burns mouth and throat like fire. A very high alcohol content, pure and concentrate, is embellished with infusions of herbs typical of the volcano … but no one will ever tell you which ones. The act of faith and courage lies in trying this “fire of Etna” (it’s really called like that!). Those who pass the burning test will be able to capture that extraordinary taste and – perhaps – also understand which herbs make it up.

A New Year toast under the volcano

If you want to take the indelible memory of a volcanic New Year with you, all you have to do is choose the liqueur you prefer and try it at midnight between December 31st and January 1st. Try it instead of the classic sparkling wine, or even champagne. Maybe a liqueur from Etna doesn’t cost much, it doesn’t even seem that elegant… but it leaves sweetness and energy inside. Everything you need to start the new year in the best possible way. Happy New Year !!