Home Blog Discovering the western side of Mt Etna

Ask anyone who has already been on Mt Etna what was his/her favourite place. The answer will probably be: the Silvestri craters, the views from the Citelli Shelter, Piano Provenzana’s ski tracks. Very few will say they loved the western side of the volcano. The side of Bronte, Adrano, Maletto. No ski tracks, on this side, no panoramic views over the coast. The top craters do not look like real craters, seen from this perspective. Yet this is the most charming part of Etna.

The “wild wild West” of Mt Etna is the most mysterious and beautiful side of the volcano. Precisely because it is less urbanized, it presents the most authentic, free and wild natural landscapes of the entire mountain body. Ancient “rope shaped” lava flows, broom woods that surround centenary craters, water springs that run on the rocky surface in tens (“favare”) … . All these environments are almost unexplored. Only true lovers of trekking and mountain walks know and appreciate them.

And only recently the authorities are realizing that mass tourism could rediscover this side of Etna, hitherto closed by the gates of the Forest Rangers for protective purposes. And perhaps it is precisely this excess of security that has preserved the landscape even from over-exploitation. The project of controlled and targeted tourism, however, is to be taken into consideration. It would open the doors to a new way of seeing the great volcano.

The western flank is dotted with small cones, ancient mouths that were the protagonists of unique and anomalous eruptions. The youngest are the De Fiore craters, which formed in the winter of 1974. On 30th January that year, spectacular lava fountains emerged from a fracture at low altitudes. They generated the De Fiore 1 crater within two weeks. The eruption ended on February 17th. Less than one month later, though, a new one started. 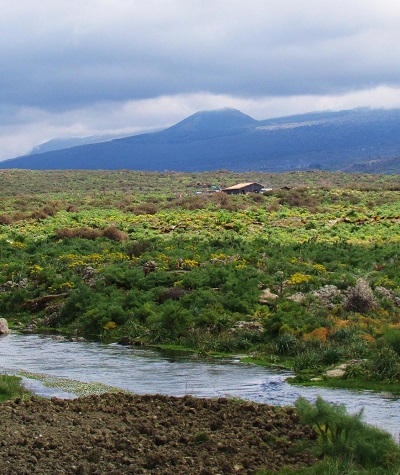 the landscape of the western flank had completely changed.

What makes the De Fiores interesting is the nature of the erupted material, on which the vegetation grows again today. It is in fact a type of lava different from the usual Etnean one. As if it were an anomalous mix coming from new depths.

The springs and waters of the western flank

The so-called “favare” rise between the municipalities of Maletto and Bronte, along an ancient lava flow of the 16th century. These are fresh water springs that come to the surface at the meeting point between two faults. They flow through the rocks forming dozens of streams. In spring time they are more evident and create a dream landscape, full of flowers and colours. The word favara comes from the Arabic “al fawwra“, or “the spring”.

About fifteen minutes drive from the favare is Lake Gurrida, born from an old lava flow that made a barrier on the Flascio river. This natural dam is still visible today. In winter, when the river is full, the water of the lake pours into the nearby vineyards creating a spectacular and extensive swamp.

Also spectacular – but not very accessible without a good naturalistic guide – are instead the Forre del Simeto. These lava gorges in which the famous Sicilian river flows deep, look very similar to the Alcantara gorges, but much wilder.

The eruptions seen from the western flank 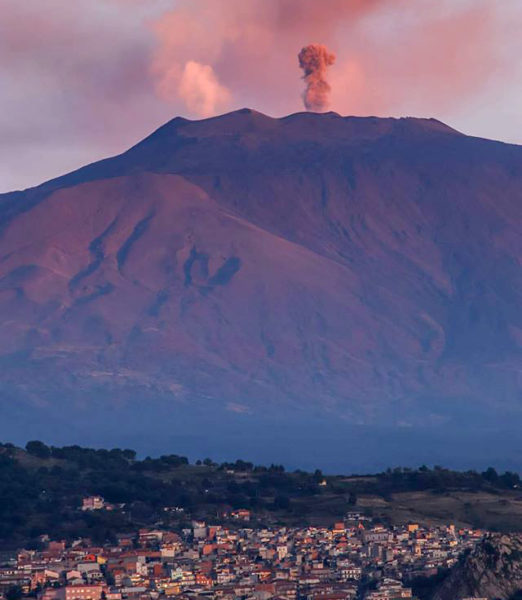 Mt Etna, from the western side, does not appear imposing. And the eruptions here are rarely admired since the most active South East crater is on the opposite side. But when the Central crater comes into operation, which can be seen very well from here with its gigantic lava fountains,  the show is guaranteed.

The perspective, among other things, makes cities appear very close to the crater (as shown in the photo on the side, by Marisa Liotta). But in reality they are about 30 km away from it.

So the feeling of danger is constant and the effect, during the most spectacular lava fountains, is truly breathtaking. All this, however, in complete safety. An emotion to try for sure.

The towns of the West

For those who love Sicilian art and history, the western side offers an equally interesting urban itinerary. A tour in Bronte, Adrano and Biancavilla will allow you not only to admire beautiful medieval views but also to taste DOC products from the Etna area. In Bronte, in addition to the obligatory tasting of the delicious pistachios, there is a lot worth visiting.  Nelson’s Castle, the Annunziata Sanctuary, the convents of the Franciscan friars, the church of the Holy Trinity and that of St Sebastian.

Adrano and its monumental historic centre (monastery of Santa Lucia, Norman Castle, Palazzo Bianchi) is evidence of how the black stone of Etna can create architectural wonders. A very beautiful and little known baroque is what makes the historic centre of Biancavilla elegant. The little town of Maniace shares the fame of Nelson’s castle and its Norman chapel with Bronte. Finally, how can we not consider a visit to Maletto, medieval village capital of the Sicilian strawberry? The small town is also dotted with lovely seventeenth-century churches. (photo by Marisa Liotta and Grazia Musumeci)