Home Blog Magazzeni, where the lava changed its course

At about 6 km off the small town of Sant’Alfio, in a place almost wild and unhabited, you will find a small church with the typical alpine architecture. The Magazzeni Church. The name is quite strange, it reminds of a noble family or of “magazzini” (warehouses) used to keep agricultural tools. But it refers to water streams that form the river Magazzeni. This short and small river has an important story, in this part of Sicily.

Eruption of 1928 and river Magazzeni

In november 1928 a group of eruptive vents opened at low altitudes, on the eastern flank of the volcano Etna. Earthquakes had preceded the event and the soil broke a few kilometers off the town of Sant’Alfio. Rivers of lava came out of the vents and ran to valley. Mt Etna’s magma is dense and slow, so it usually does not pick up speed that easy. But here it found the bed of river Magazzeni so it had its quick way to the town.

Locals saw the danger coming. So they decided to go on procession and pray their three patron saints: St Alphio, St Cyrinus and St Philadelphus. They took the statues of the saints on the river Magazzeni’s bed as the eruption went on. Suddenly, on november 3, the lava changed its course with no logic explanation. The river of fire turned north and destroyed the nearby village of Mascali. Sant’Alfio was saved “by miracle”.

The construction of the little church of Magazzeni 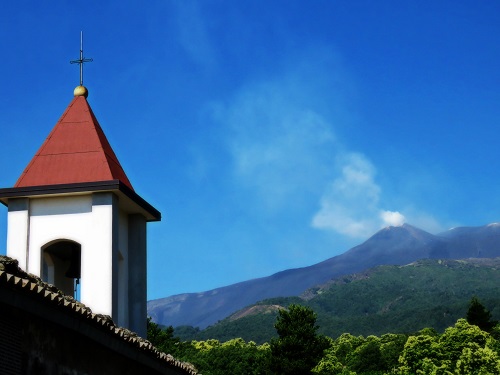 As part of the celebrations in memory of the 30th anniversary of that event, in 1958, the people decided to build an altar to the three saints. The generosity of the devotees, however, was so large that it was possible to raise a small church instead. The simple architecture, in concrete and red bricks, with a small bell tower that stands in front of the body of the volcano, make this place suggestive and unique.

Normally the gate that protects the church is closed, in order to avoid the intrusion of animals and thieves inside. But through the glass you can admire the miraculous statues that people still come to greet. Next to the church there is an engraving on the rock reminding the events of the eruption and popular faith.

The small church of Magazzeni can very well be part of a tourist itinerary of Etna that includes the town of Sant’Alfio. Its panoramic square with the large church with a lava stone façade is the ideal place for a unique selfie. From here, then, you can explore some routes of the Etna Park and some natural monuments such as the Chestnut of the Hundred Horses.

Located just outside the center of Sant’Alfio, this immense chestnut tree, has an age that certainly exceeds 400 years. According to legend, a queen and her entire escort of a hundred knights found shelter under the enormous tree in the Middle Ages.

How to get there