Home Blog Milo, the small Fornazzo chapel in the hug of the lava

Going on with our itinerary of the Etnean churches buried or touched by the lava, we will visit the Sacro Cuore. After the surprising churches of Nunziata, Mompileri and Campanarazzu there we go along the road leading from the eastern flank to Etna North. You take it in the village of Fornazzo, a part of the municipality of Milo.

Not far from the village, among lava rocks and woods, we are still in the territory of Milo. Next to a famous restaurant set in the middle of old lavas covered with flowers there is this small chapel which has also challenged the volcano itself. Here we are at the Sacro Cuore (Sacred Heart of Jesus).

Story of Fornazzo, the lava village

Fornazzo comes from the lava and is inside the lava. This village has been able to dominate the volcano, transforming a desert of black rock into a mountain village where people still live at slow and genuine rhythms. Fornazzo owes its name to the legend according to which its founder took up residence in a lava flow cave. The cave, from afar, appeared as one of those ancient stone “furnaces” also used by the Romans. Hence the name “al Fornazzo” and then only Fornazzo.

Built in lava, therefore, but far enough  from the central crater to feel safe … Fornazzo experimented on its own land not to be as safe as it believed. Sometimes – rarely fortunately – Etna plays bad jokes. And the lateral eruption of 1979 was one of them. From 3 to 4 August several fractures opened downstream of today’s South East crater and up to the edge of the Valle del Bove from the side of Monte Fontane.

The chapel that stopped the lava 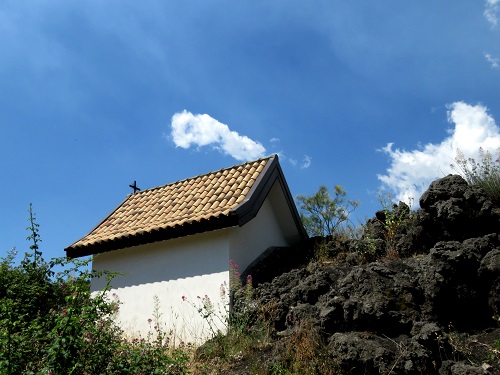 The lava was channeled into the valley called Pietracannone and in a few hours reached the Mareneve road that connected Fornazzo with the Citelli Shelter. It cut the road in several places and headed for Fornazzo. The inhabitants were immediately moved to the valley, but some country houses were devoured by the river of fire. Along the way, there was a small altar dedicated to the Sacred Heart of Jesus, as was the main church of Fornazzo.

The lava literally surrounded the small sacred building in a hot embrace. Yet it did not destroy it. In fact, it stopped its race after going down for more than 6 km from the initial fracture. Obviously the locals immediately spoke of a miracle, the volcanologists of simple reduction of the eruptive charge. For the future of Etna tourism, this event was very important. It would show forever what it means to live side by side with a volcano.

The chapel of the Sacred Heart today

Today the small chapel of the Sacred Heart of Jesus, near Fornazzo, is one of the first stages that many excursions – including ours – offer to tourists who come to know Etna. Restored and enlarged, the chapel today is similar to a small church with whitewashed walls. Closed by an iron gate with windows, inside it houses the statue of Jesus and several gifts – often bouquets of flowers – left by the people.

The 1979 lava is still there, all around, and closes it on two sides. With those same boulders of lava, the people of the village made 14 stone slabs on which the Stations of the Via Crucis are engraved. They come up here during Easter, for some of the sacred rites of this period.  Or they come to thank God for saving the village from the eruption. Tourists, on the other hand, admire the power of the volcano that devastated roads and countryside before ending its race against these white walls. (photos by G.Musumeci)