Home Blog Mt Etna, the best places for your photos to eruptions

Mt Etna is a never ending show. It is beautiful all the time, in every season, and offers all the best nature has. Blooming and scented in springtime, colourful in the autumn, covered in snow in the winter and always ready to take you by surprise with its eruptions. An explosion today, lava flows or ash clouds tomorrow. If you go visiting Mt Etna you better take your camera with you.

Mt Etna is also a big mountain. Big in size but also in height, so you cannot always admire an eruption from its slopes. There are points – for example the Silvestri Craters, near the Rifugio Sapienza on the south side – from which the main craters are not visible at all. So if you want to go on Mt Etna to take great photos to eruptions, learn about the best panoramic points and get there with the help of your expert guide. 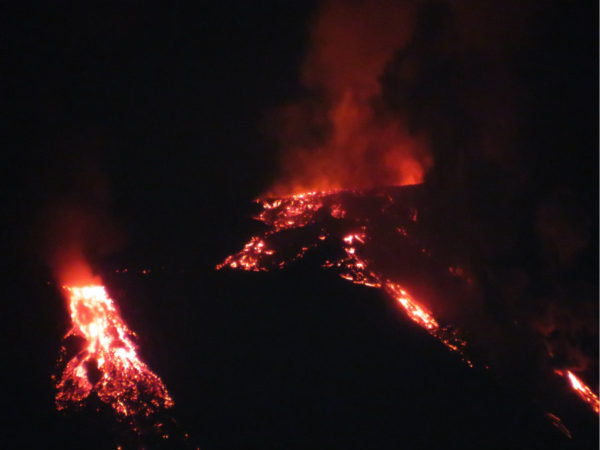 A relatively easy path (the name means “the donkey’s back”), which starts from the southern flank of Etna, a few kilometers before reaching the Silvestri Craters, and rises to 2010 meters. Apart from the first stretch, very steep and tiring, most of the route runs easily up to the point overlooking Valle del Bove and the summit craters. The South East Crater complex will be in the foreground.

Starting from Piano del Vescovo (1720 m), always on the south side of the volcano, the path goes up through woods and ancient lava rocks towards a panoramic point that once again sees the South East Crater in the foreground, the summit craters behind it and a good part of the Valle del Bove all around.

We are on the north-eastern side of Etna and in particular at the Rifugio Citelli. From here the path winds its way to 2035 meters up to a point where you can enjoy the view of the Valle del Bove and the  North East and South East craters in particular.

Starting from Etna Nord, Piano Provenzana, the path first reaches the Volcanological Observatory and then the edge of the Valle del Bove at an altitude of 2900 meters, just behind the large summit craters. In the foreground you will have the North East Crater.

Piano dei Grilli (Crickets Plain) is not close to the craters but offers a unique panoramic view over the whole Mt.Etna complex from the western side. Walking through the woods of broom, the top of the volcano appears in all its grandeur and when the eruptions concern the craters Voragine, Bocca Nuova or North East, the show is guaranteed from here. Make sure you have zoom lenses with you.

Other panoramic points at the foot of Etna

If you like photographing eruptions but want to include them in a wider landscape than just the craters, some points at the foot of Mt. Etna are just as fascinating for your shots.

• From the port of Riposto, for example, with a fantastic view of Valle del Bove, when the lava flows come down in its canyons.
• From the Giarre motorway exit, from which you can enjoy the same view.
• From the State Road SS 114 near the Hotel Orizzonte Acireale.
• From the port of Catania on days of good visibility.
• From Bronte and from Maletto.