On the eastern side of Mt Etna, overlooking the wonderful view of the Ionian coast, the small town of Sant’Alfio stands all around the parish church of the same name. The church is dedicated to the saint martyr brothers Alfio, Cirino and Filadelfo, whose story dates back to year 253 AD. The three were christian preachers, the Romans had imprisoned them and took them from Rome to Lentini to kill them. On the way, they stopped on Mt Etna, right there where now the town is. It seems the brothers also made miracles, here.

The town was born as a defensive tower of Mascali County, in the Middle Ages. It grew larger during the following two centuries and became an independent city in 1923. Worldwide known because of its natural monument, the  Chestnut of 100 Horses, Sant’Alfio is proud of its secular tree that can be visited with a free entrance to the park. But the town is worth the visit also for two of its four churches, the most charming ones.

The main church of Saints Alfio, Cirino and Filadelfo 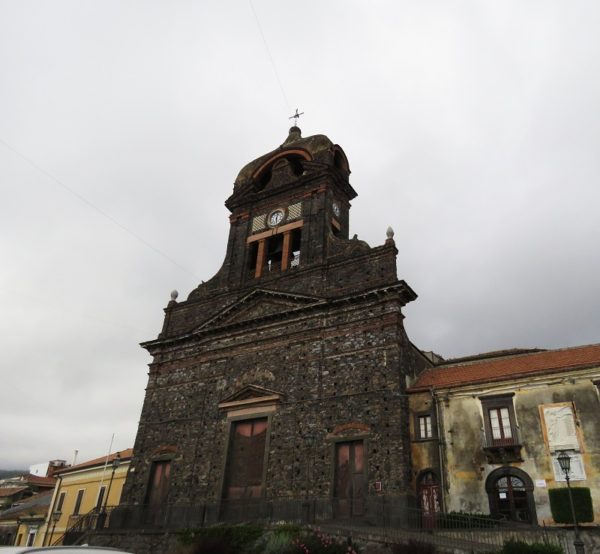 At the beginning of the 17th century, the priests who administered the only part of feudal territory not assigned to the sons of the local lord decided to build a church. This first building is not visible today, but its structure forms the current central nave of the “new church”, enlarged in 1811. Works  continued for a long time and ended only around 1867, when the apse of the old church was demolished and finally there was the present church, but still without a façade.

The lack of finances forced the diocese – first of Messina, and of Acireale from 1872 onwards – to suspend the external completion of the church. They slowly completed the furnishings and decorations of the interior, but it was never possible to cover the façade with the marbles that were supposed to embellish it. And that’s why it still appears in rough lava stone. But it is not bad to see, however,  and indeed it looks original and perfectly integrated into the volcanic landscape in which it rises.

The church houses a painting dedicated to the three Saints, the statues of the three martyr brothers donated by the church of Saints Peter and Paul of Acireale, the “Bara” or the processional chariot, the large bell (45 quintals!) named “Maria”. The external doors are made of iron, thanks to the contribution of the people who had emigrated to Australia.

Built in the 17th century, 6 km from the town centre, to give a chance to attend the Sunday mass 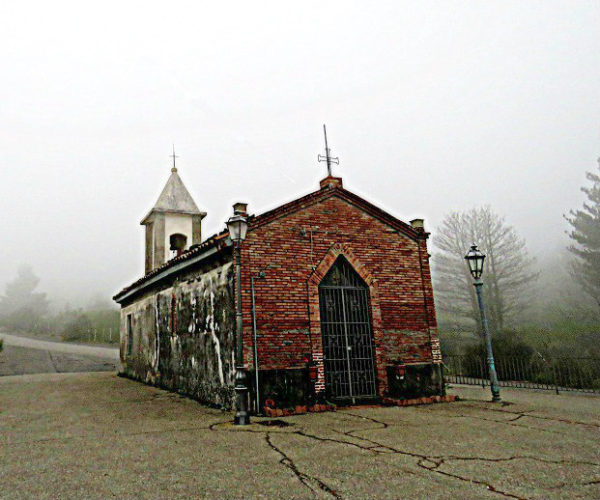 to the farmers and forest keepers of the fiefdoms of Cerrita and Magazzeni, over the centuries the church was abandoned. In fact, the population moved, gradually, more and more downstream. The cult resumed in the early 20th century, when “the miracle of lava” rekindled love for that place in everyone.

On 3rd November 1928 a lateral eruption of Etna caused rivers of lava to flow at low altitude. The fire went towards the church of the Magazzeni, threatening the whole town of Sant’Alfio closely. Despite the danger, people left in procession carrying the statues of Saints Alfio, Cirino and Filadelfo towards the lava stream. It is said – and it is also testified by a painting kept in the new church – that shortly before reaching its destination, the statue of Sant’Alfio fell to the ground and the palm it held in the hand broke. For the people this was the sign: “where I leave my palm is blessed land and the lava will have to spare it”.

Inexplicably, the next day, despite the opening of a new eruptive crater, the lava flow stopped. Just behind the place where Sant’Alfio had lost his palm. It was later seen that the fire had literally sunk into a crack in the ground, becoming more liquid and thus changing direction. People consider this a miracle wrought by the three saints. In 1958, a new sanctuary was built next to the first small Magazzeni church. (photo by Grazia Musumeci)