Home Blog The Chestnut of One-Hundred Horses and other historical trees on Mt.Etna

The nature of Mt. Etna reserves many surprises, which can be interesting for tourists too. There are in fact trees that are as important as -and maybe more than- an artistic or architectural monument and on our volcano there are at least three of them. It must be said, first of all, that Etna has special records relating to the trees that cover it. Beyond the beech forests, beautiful pine forests, here we find the highest (above sea level) chestnut trees in Europe, even over 900 meters asl, and birches at the lowest latitude (these trees being typical of the northern regions). And then there are the magnificent monumental trees … come and discover them with our excursions.

The chestnut of One-Hundred Horses, of the Ship and the Ilice Carrinu

In the territory of the municipality of Sant’Alfio, on the eastern flank of Etna, along the Provincial Road 84 a beautiful and ancient chestnut tree rises: the chestnut of One-Hundred Horses! According to the legend, it seems that here they found refuge – during a storm – an unspecified Queen and her entire escort following, that is a hundred horsemen with their horses. The tree was so big that it managed to repair everyone from the rain. According to the different versions of the story, the beautiful Queen on that occasion also found love! If you see this monumental chestnut tree today, you may mistakenly think that they are three plants. Instead they are three gigantic branches produced by one single trunk that has only one root, perhaps a thousand or two thousand years old. There is no certainty about age, but certainly this tree has been here long before the 16th century. The measures are record-breaking. Twenty-two meters high for a total crown diameter of 59 meters!

Not far away from this one, there is another millennial chestnut tree, although less famous than the first: chestnut Della Nave (of the Ship), also called “arusbigghiasonnu” (sleepbreaker) because of the chirping of hundreds of birds that find shelter here, in the morning and at dusk, producing such a noise to awaken the people from sleep!

Still on the eastern flank we can admire the Ilice Carrinu, or Ilice del Pantano. The first name is a dialectal distortion of the name “Carlo”, perhaps indicating the owner of the land on which this tree stands. Pantano (mud) instead refers to the muddy conditions of the place. We are just above Zafferana Etnea, here. Ilice is actually the Latin name of the holm oak, which in the Sicilian language has never changed: 20 meters high, with a trunk diameter of 5 and a crown diameter of 30 meters, this tree can be reached by following the Dagalone path of Mt Etna’s Natural Park, starting from the Caselle district, between Zafferana and the municipality of Milo. 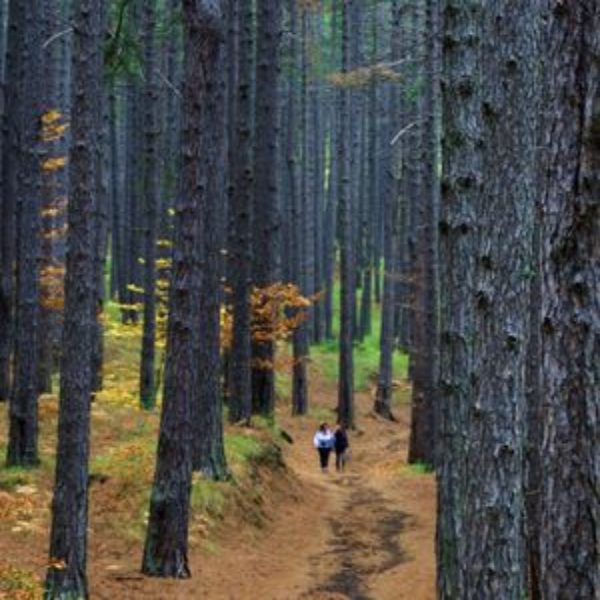 We must instead turn on the north side of Mt Etna to find, almost anonymous, hidden among tens and tens of his descendants, the most beautiful and ancient pine tree of the volcano. For the locals it is simply known as “Zappinazzu” (very strange name that perhaps derives from “uncle Pinaccio” or from “zappinu” the dialect name of the plant). In order to find and admire it go up from Linguaglossa for 11 km on the Mareneve Road, and you have to keep your eyes open because the sign that indicates the place suddenly appears on the left. If you find yourself at the Brunek refuge, instead, you have to go down for about 2 km and you will find it on the right. It is thought to be over 300 years old, measures 31 meters in height and has a trunk diameter of almost 2 meters. If you find it, photograph it with the respect due to an old wise guy who takes nourishment from – and gives everything of himself to – this beautiful volcano. And to us too, as we come to pay him homage. (PHOTOS BY grazia musumeci)