Home Blog Mt Etna, the eruption of July 27 is over

(photo above: Grazia Musumeci – photo in the article by Massimo Tamajo Fotografo Naturalista)

The spectacular eruption that resulted from the nth fracture of the New South East Crater lasted less than 24 hours. In addition to the continuous emissions of gas and ash, a copious river of lava started from the new vent, which this time spilled onto the south-western flank of the volcano. 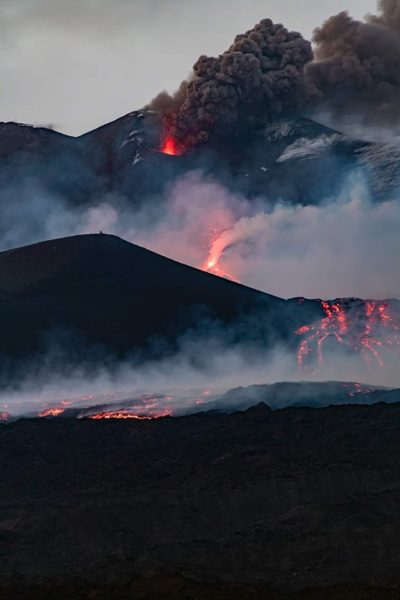 The type of twisted and hilly terrain, typical of that area of ??Etna, has meant that the river of fire took on spectacular shapes and, in the photos in perspective, seemed very close to the inhabited centers – which however never were in danger.

Now it is all over, and the National Institute of Geophysics and Volcanology explains how the facts went with this official statement: “During the inspection, it was found that both the explosive activity and the supply of lava flow ceased. Consequently, the eruptive field is substantially stationary and gradually cooling.

The SO2 flow detected by the FLAME network from 9:00 UTC indicated a gradual decrease in the outgassing regime. The magnitude of the tremor returned to low values ??even if slightly higher than those preceding the activity. As far as soil deformations are concerned, there are no significant changes at the Tilt and GPS stations. ”