In Sicily, the Middle Ages left very deep traces. Not so much in architecture, which was almost completely replaced by the Baroque one in the 18th century, but in the traditions. Peasant traditions, linked to superstitious rituals, and feudal traditions that recall the descent of the “lords” among their own people.

We can say that there is not a single town, in Sicily, that does not have its own “palio” or its own medieval parade. But some are more famous and characteristic than others. We present here five of them, all to be discovered. 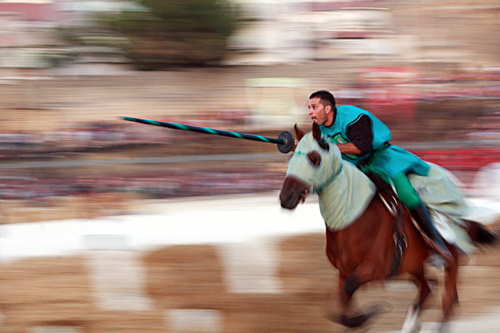 The festival of the “Norman Joust” was held for the first time in 1952.  It was a corollary for the procession of Our Lady of Victories, patroness of the town of Piazza Armerina (district of Enna). But slowly it has enriched itself with events that make it a separate celebration.
It takes place over three days, from 12th to 14th August included. The most exciting part is the joust of the knights, the real “palio”, which takes place on August 14th. The knights challenge each other as they once used to, on horseback and armed with spears. And… not always protected by the armour!

The festival of this Etna town, in the district of Catania, usually takes place at the end of July. The centre, rich in medieval architecture, is invaded by festive costumed groups: courtiers, jesters, knights compete in dances, challenges but also tastings of ancient recipes.

Montalbano Elicona recalls, every spring, the courageous deeds of the lord Giovan Guerino “Difensor Populi” which in 1356 resisted a long siege to protect the town from enemy assaults. The historical parade includes, in addition to flag-wavers and dances, also the staging of the last battle of Guerino, with the grand finale of the entry of the enemy troops in town. 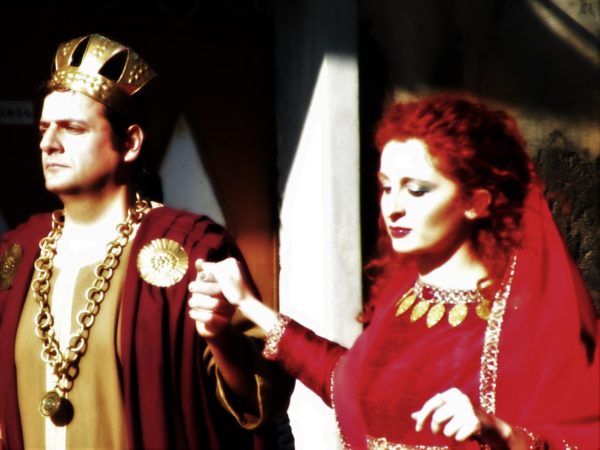 tower. Around this, in the month of August, they hold the Feast of Medieval Myths and Legends. In addition to the classic historical parades, the “Schermaglia”-  a battle between noble men- is staged. After that the whole town sits in the square for a collective dinner, based on Arab-Andalusian recipes handed down to us from the Middle Ages.

The Court of Frederick II in Santa Lucia del Mela

The town of Santa Lucia del Mela (Messina) also celebrates its medieval past with a costume parade: Alla Corte di Federico II takes place every year in July and reproposes the arrival of the noble sovereign and his courtiers. More than a hundred actors parade in beautiful costumes for the streets of the town’s centre. The funniest part is certainly the Jugglers Contest, in which street artists test their skills with music and games typical of the Middle Ages.