Those who have lived at the foot of Mt. Etna for more than thirty years certainly have seen at least one. And when they saw it, it was really scary. We are speaking of the side eruptions, those that suddenly break the ground on one of the sides of the volcano and begin to emit lava at low altitude. Sometimes they can also occur at relatively high altitudes, but being in any case close to inhabited territories the risk that they overwhelm some urban center does exist.

Is it irresponsible to build on the flanks of Mt. Etna?

The area around Mt. Etna is densely populated, so on each of its sides rise towns and villages that may be at risk. Is it irresponsible to build in these areas? Let’s just say that since the Regional Park of Etna was established it is forbidden to build beyond certain boundaries, but the oldest urban centers have been there for centuries. And no, they were not crazy at all! They built on the sides of the volcano because here the soil is fertile and healthy, there are water springs and wood and stone as building materials. The side eruptions are a risk with which you live, but can not be predicted so it is impossible to know where and when it is safe to build.

Why does a side eruption take place?

The lateral eruption is an anomaly that can also occur in a volcano with already active craters such as Mt. Etna. For some reason that can not be predicted, the magma sometimes fails to climb along the main conduits leading to the summit craters and then presses the rock around it, splitting it, or finding tunnels to creep into. If it succeeds it can come to the surface everywhere. The geography of Etna, so full of ancient cones scattered here and there, proves it very well.

Side eruptions. Can they still occur? 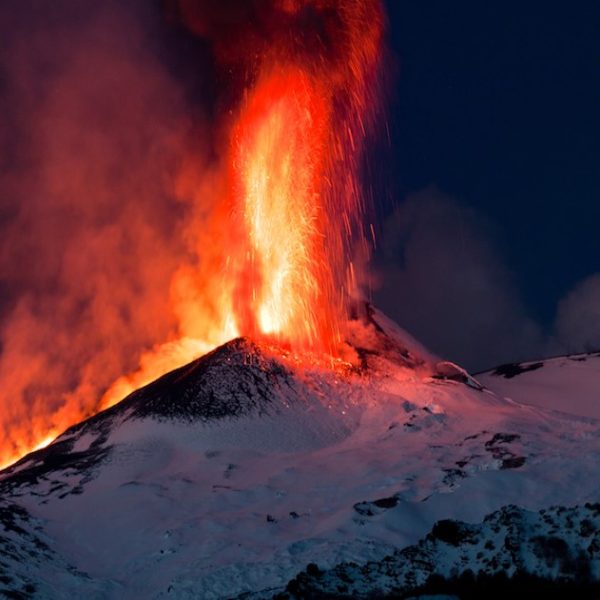 The most famous side eruptions of Mt. Etna, among the thousands of its history, are: that of year 49 before Christ on the western flank, that of 252 AD on the southern side (which seems to have been stopped by the miracle of St.Agatha!), that of 1329 on the east side, that of 1669 in Nicolosi, that of 1928 that destroyed part of the town of Mascali, the one of 1981 that threatened Randazzo. In 1991 a low-altitude eruption nearly entered the town of Zafferana Etnea.

Also the eruption of 26th December 2018 is considered “lateral” because – although occurred at high altitudes – the lava came out splitting the rock on the west wall of the Valle del Bove. Can other eruptions like this occur? Yes, of course, the catanese volcanologist Marco Neri told us. The latest studies have revealed that Etna produces lateral eruptions with precise cadences: every 10 or 20 years or so. Now it seems it is just starting one of these periods. The difference with the past? Today thanks to National Institute of Volcanology we know the early warning signs and we know how to defend ourselves a little better.