Home Blog From Savoca to Forza d’Agrò, looking for “The Godfather”

One of the attractions tourists love most, when they come to Sicily, are the so-called “mafia routes”. Despite the hard work done in order to separate the image of the island from the criminal phenomenon, brought to perfection in the last 18 years by the TV series “Inspector Montalbano”, foreign visitors still love to venture in those places where the names of mafia bosses and the gunshots of the 1970s films echo, together with the marked Sicilian accents. The Godfather is one of these. And Americans and Germans are the most interested in this itinerary.

Where was The Godfather filmed?

In the late 1960s, the American director Francis Ford Coppola decided to make a film based on the novel of the Italian-American writer Mario Puzo, entitled The Godfather. The story is set between New York and Sicily immediately after the Second World War, but the location of the novel – Corleone – was already in full construction boom, at that time, so they could not use it as a credible set. The villages of the area between the Alcantara and the Agrò rivers were then chosen, and specifically: Savoca and Forza d’Agrò, in the province of Messina.

Savoca, the mummies and the mafia wedding

The medieval town of Savoca, recently listed among “the most beautiful villages in Italy”, was the set of some scenes from the famous film, specifically those where the main character Michael meets and marries Apollonia. The places that remind us of the event are: Bar Vitelli café, the palace of Piazza Fossia and the Church of St Nicolò. 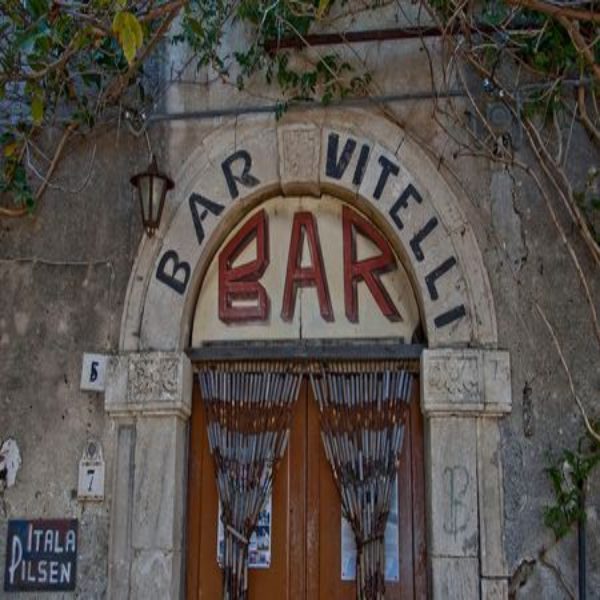 The palace is Palazzo Trimarchi, a noble 18th century building which houses on the ground floor the old-fahioned café Bar Vitelli. Inside the palace, the house of Michael was set while the characters often met inside or in front of the Bar, still existing today! The wedding scenes were set in the beautiful fortress-church St. Nicolò (13th century).

Do not miss, in Savoca, also the Mullioned Window, the remaining of one of the oldest houses of the town; the 12th century Town Gate and of course the monastery of the Franciscans housing the famous Mummies! A National Monument since 1910, also the medieval Main Church is worth the visit.

The views and churches of Forza d’Agrò

Both Savoca and Forza d’Agrò, like many small towns in the Messina area, are perched on top of the mountains and offer spectacular views of the Ionian coast. From Forza d’Agrò you can admire even the Queen of the Ionian Sea, the beautiful Taormina!

The town, which is named after an ancient fortress that used to watch over the Agrò river valley, is dotted with beautiful churches, including the one in which some scenes of the Godfather were set, the main church of Maria Santissima Annunziata (18th century). The Church of the Holy Trinity, more than two centuries older than the Annunziata, is even more charming. Of the oldest church ever in town, St Michael, only the walls dating back to 1169 remain, after the landslide that destroyed the first nucleus in the 14th century.

From the panoramic balconies of the town you can admire both the stretch of beaches to the north, towards Messina, and the silhouette of Taormina to the south. On clear days the beautiful cone of Mt. Etna appears in the background to complete the whole picture.