Attention! Do not confuse this observatory with an astronomical one, though you can still see wonderful stars, from here. The Observatory Pizzi Deneri is a volcanic monitoring center and scientists use it, in fact, to study Mount Etna and its behaviour. It was not supposed to exist, right here, this observatory. Not on this north side of the volcano, in the territory of Linguaglossa. But it does exist, thanks to … Etna itself.

Up to 1971, there was one University Observatory on the south flank of Etna. Then, in that very year, the eruption that made the great 1971 fire show – and damages too – destroyed it. It took six years to decide to build a new one, somewhere else. Observatory Pizzi Deneri today is both a precious study place but also a meeting point for hikers and lovers of Etna’s unique eruptions.

How the Observatory was born

Having lost the ancient Etna observatory forever, volcanologists and geologists found themselves without an important point of support and observation. In the 1970s the sophisticated surveying measures of today did not yet exist. So, to understand the volcano you had to … look straight “in its face”! The project for a new high-altitude study station was carried out by the scholars Tazieff, Marinelli and Villari and the construction was completed in the summer of 1977.

The building has a shape of two side-by-side domes, and not by chance. The roundness allows snow and volcanic ash to slide quickly, without accumulations that can break through the ceiling or block walls and entrances. Furthermore, the two domes have been designed to contain enough rooms for scientists, young students in training and instrumentation.

The Pizzi Deneri Observatory was the first to contain two long-base clinometers, to measure ground deformations. These instruments were – and are – housed in two 80-meter corridors located 10 meters deep under the structure. 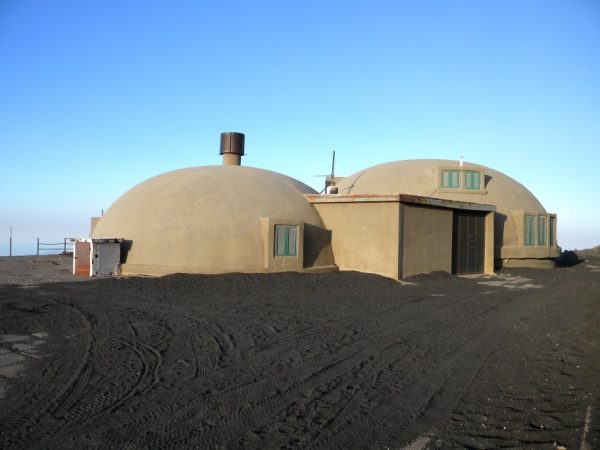 Where is the Observatory located

The new observatory was built in 1977 at 2818 meters height, in the Pizzi Deneri area. This is a ridge overlooking the Valle del Bove. It was born from ancient eruptions (between 50,000 and 30,000 years ago) and is what remains of the building called “Ellittico”, ancestor of modern Etna. The highest peak of the ridge reaches 2847 meters and offers a unique view of the Ionian coast on one side and the summit craters on the other.

The observatory is located a little further down but in an equally panoramic position. Which is very useful for the studies of volcanologists. Today the many computers and sensors scattered everywhere on the body of the volcano no longer justify the existence of such a place of observation. But it is still exciting to climb up at this altitude surrounded by a stunning natural view. Pizzi Deneri thus remains very popular and still today is supplied with cutting-edge technologies.

Pizzi Deneri is a contraction of “pizzi de’rineri” (the peaks of the sand gullies) and in addition to hosting volcanologists it is also the arrival point of important hiking trails (video here). One above all, the one that starts from Rifugio Citelli and reaches the observatory passing through Serra delle Concazze. The altitude difference gets to 1100 meters! It is in fact a route for expert, trained and athletic hikers, as it is considered a trek of high difficulty.

You walk 9 km in steep uphill and then downhill, taking about eight hours walk. On certain occasions, upon returning, the guides make a detour to Mount Frumento delle Concazze. This is a large extinct crater that is really worth visiting. But this makes the route even more complicated, not really recommended for those who have never faced certain adventures on such a challenging mountain. Why is the trip worth the enormous effort? The views are spectacular. And the visit to a place like the Observatory and its interesting long history is an experience to live.