On October 29th, 2022, a good slice of the towns on the eastern side of Etna will remember the twentieth anniversary of an event that few others in Italy will remember. That same day, in 2002, in fact, a serious earthquake struck the municipalities of Acireale, Giarre, Zafferana Etnea and Santa Venerina causing considerable damage, some injured and several homeless. Everything passed over in silence because – just two days later – a less violent but more bloody earthquake struck region Molise. It caused few collapses but also the death, in a school, of 25 children. The popular emotion for that immense drama canceled the attention from the Sicilian earthquake, which in terms of damage was much more serious. Most likely, the memory of the “Santa Venerina earthquake” will be obscured even in its twentieth anniversary. But we cannot forget it.

The 2002 earthquake and the “perfect eruption”

The so-called “Santa Venerina” earthquake” (from the name of the town that suffered the largest damage) was the background to one of the most terrible and spectacular eruptions of Etna. An eruption so complete that it is still called “the perfect eruption”.

Between 26th and 28th October 2002, a series of seismic swarms affected the southern and northern flanks of Etna. The volcano was “moving” but it was not clear in which direction. When, on 27th October, a series of fractures opened above Piano Provenzana (north side of the mountain) it seemed clear that the great accumulation of magma had found its outlet with a lateral eruption. The eruption was far from the towns, but it still destroyed some tourist facilities located around the most famous ski slopes of Sicily. 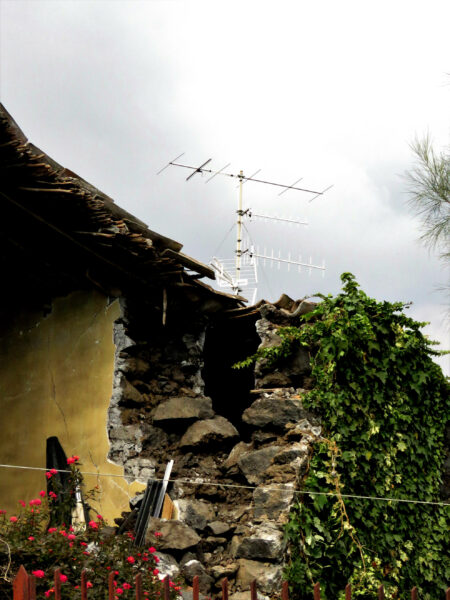 The seismic event on the morning of October 29th, therefore, came almost unexpected. A strong seismic movement, rated 4.4 on the Richter scale, deformed the eastern faults of the volcano. It caused collapses and fractures in the inhabited belt that goes from Acireale to Giarre, passing through Santa Venerina and Zafferana. The earthquake was closely related to the eruption and movement of the outgoing magma, but it caught people unprepared. Several ancient houses collapsed, while the most modern resisted but reported considerable damage. The story of the “perfect eruption” is reported by numerous press organs with attention to detail (the most fascinating video is THIS ONE, by INGV). Here we would just want to talk and remember the earthquake.

The damage of the earthquake and the reaction of the people

The damage of the 2002 earthquake was considerable and resulted in the almost total destruction of a district of Santa Venerina, the Bongiardo area, several collapses in the hamlets of Acireale (Guardia-Mangano and San Giovanni Bosco) and many houses damaged, although not collapsed, in Giarre and Zafferana Etnea.

The strongest shock of the earthquake was recorded in the late morning of October 29th, while other repetitions took place at around 6 and around 7 pm. Precisely because it occurred during the day, no serious injuries or deaths were recorded. But it is also true that people reacted laudably to the first dramatic shock. The first help, for example for many elderly people trapped in their old country houses, came from the same inhabitants and neighbours at the time.

We will remember the farsightedness of the principal of a school in the town of Giarre who was quick to let the children out after the first “warning” shocks. Thus she avoided a massacre. In fact, during the strongest reruns, the roof of a classroom collapsed. Following the earthquake, 1,400 people were left homeless. The entire district of Catania was exempted from paying taxes for several years to follow, so to allow the reconstruction of the towns.

This year we celebrate the twentieth anniversary of this earthquake. Many houses have been rebuilt, or torn down, or restored. The owners were able to return to their homes after years spent renting or staying with relatives. Unfortunately, some damage is still visible today. One above all the wall that runs alongside the State Street 114 at San Giovanni Bosco, which still “hangs” towards the field below!

The fault has remained quiet over the past twenty years. On the other hand, other seismic movements caused other damage elsewhere, such as the 2018 earthquake that hit the southern flank of the volcano. Meanwhile, volcanologists, using modern and social media, have educated the population on how to behave during an earthquake. And many of their indications – for example, on how to build in earthquake-resistant ways – have been respected.

The memory of this sad event must always remind us in which environment we live. It should remind us that our land is a “dancer” and although it is very generous with us it demands respect. And respect implies an honest and correct way of inserting ourselves into this strong and rebellious nature, following the advice of those who know more than us. (photos by GRAZIA MUSUMECI)