It had to be all over, they had to be the last breaths of an eruptive event that seemed to never end … and for four days in fact Mount Etna fell into silence. No more fountains, no more roars. Tremor decreasing. End of the eruption? Maybe. At the INGV they never get out of balance with forecasts … and they do well. Not everything can be measured with technical tools. And the “intentions” of a “thinking” volcano like Etna, in fact, you cannot be predicted  so easily.

The surprise of paroxysm number 16 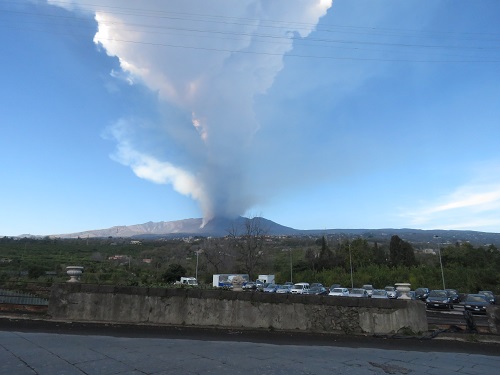 And here is the surprise of paroxysm number 16. Or number 20 if you start counting from the events of December. It happens that after two days of bad weather and low-altitude clouds, the sky opens up and Mount Etna returns to be visible with small fountains from the South East Crater. It is 9 pm on 23rd March.

Soon the tremor begins to rise, but slowly, without flickers. The lava fountains remain low, but have such a power as to produce very strong rumbles and micro seismic shocks. As always, they expect the “big lava fountain” , the one usually several kilometers high which puts an end to the paroxysm. But this never comes.

Once again unpredictable, Etna leads this paroxysm throughout the night and for a good part of the next morning. The roars are rhythmic, the great cloud of ash pours the micro lapilli on Catania and surrounding areas. Everything goes on very slowly and stops, gently, around noon on March 24th. A real eruption or a paroxysm? We cannot explain. For volcanologists it is a very new, different event. Perhaps a brand new phase begins or does it mark the culmination of the previous one? ( photos  by G.Musumeci)