The beautiful island of Sicily with its mediterranean sea, the fascinating diversity of landscape and the cultural treasures continues to seduce travelers.

Since the time of the legends, Sicily always has been attracted passersby with its beauty and the perfect place in the heart of the Mediterranean. By the poets from Homer to Virgil, the land of the cyclopes has been praised as well as from the many ancient cultures – Phoenicians, Carthaginians, Elymians, Greeks and Romans. Everywhere in Sicily you can find the memories and the ancient remains of the past civilization, in the classical perfection of Agrigento’s Concordia temple, the rare grace of a dancing satyr statue rescued from Mazara del Vallo’s watery depths as well as in the monumental rubble of Selinunte’s columns.

The colorful dishes of culinary influences: The focus in the Sicilian kitchen is still on the basic island-grown ingredients: citrus, shellfish, tuna, swordfish, pistachios, almonds and ricotta. Even the oldest sous-chef uses his grandmother’s recipe for Pasta alla Norma. Modern chefs may play with details like in a poetic imagery of Mount Etna: the tomatoes are lava, the eggplants are cinder, the basil the greenery and the ricotta the snow. But Sicily’s timeless recipes – like the simple cannolo or the tasty fish couscous continue to live.

Read also: Your first time in Sicily? What specialties you shouldn’t miss!

You will get a first impression of Sicily if you see the various landscape. If you fly to the island you will be greeted of the smoking volcano Etna in Catania or by the sparkling Golfo di Casellammare close to Palermo. The combination of the sea, the volcano and the mountain scenery offer you an incredible number of outdoor activities. Hikers can enjoy the tracks along the beautiful coastline, can climb up an active volcano or just have a walk in the breathtaking countryside. Birdwatchers will see the diversity of species on the Africa-Europe trail and the Mediterranean’s most pristine waters will discovered by divers and swimmers. With the various activities on Sicily as well as on the offshore islands you will spend an amazing and unforgettable vacation.

Sicily has an amazing classical heritage but also later artistic and architectural treasures. Especially the Arabic domes and arches, the byzantine mosaics and the Norman palace walls will delight you during your walk in Palermo. In the south east of the island Sicily you will find a stunning number of baroque architectural masterpieces, from the golden-hued domes and palace of Noto to the multi-step cathedral facades of Ragusa and Modica. The remains of the Arab and Norman castles and the cultural expression is one of the island most stunning attraction.

Our daily trips to the most popular destinations in Sicily offer you the possibility get to know the island’s wonders.

Contact us to book your favourite tours with us. 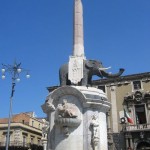 Visit the old town of Catania which was declared UNESCO world heritage site in 2002. Enjoy the visit of the historic centre with its baroque buildings, the cathedral, the black elephant (the town’s landmark) on Piazza Duomo, Via Etnea, the medieval castle “Castello Ursino” and many other spots of the town characterised by black lava stone. The vibrant city, that was founded by the Greeks in the 8th Century BC, offers many surprises for visitors.

The picturesque and historically rich town of Taormina was founded by the Siculi around 1300 b.C. and later affected by the Romans and the Greeks. We will visit the ancient Roman-Greek amphitheatre, the cathedral, the small theatre Odeon, the ”Corvaia Palace” and take a walk in Corso Umberto. Finally the stunning view over the eastern Sicilian coast and the Mediterranean will take your breath away and you’ll fall in love with Sicily forever. 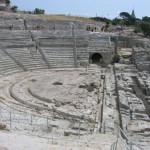 Excursion to Syracuse and Noto

Visit of Syracuse and the Archeological Park of Neapolis and its Greek Theater, the Roman Amphitheater and a rock caves known as the “Ear of Dionysius”. Next stop is the isle of Ortigia with its Cathedral erected on the ancient Greek temple of Athena, the “Fonte Aretusa”, a fresh water spring with a fountain and much more. Next stop is the baroque town Noto, UNESCO world heritage, where we will admire beautiful Palazzi like the Porta Reale, the cathedral and the church Saint Domenico. 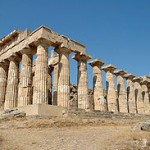 In Agrigento and the surroundings you can visit some of the most important archaeological sites of Sicily. Approximately 2 km south from the old town lies the “valley of the temples” (VALLE DEI TEMPLI) famous for its well preserved temples, the temple of “Concordia”, Hera’s, Heracle’s and Dioscur’s temple. In the „Valle dei Templi“ you can also visit an archaeological museum. In 1997 Agrigento was declared World Heritage site by the UNESCO. 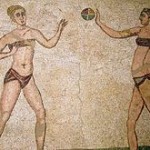 During the tour to Caltagirone and Piazza Armerina you will visit an ancient well-preserved roman residence, built in 300 A.D. The “Villa Romana del Casale” that is decorated with unusual mosaics, e.g. the famous “Lady in bikini”. Caltagirone is the historic centre of the ceramic production in Sicily. Here you can enjoy a pleasant walk through the old alleys, admire and if you wish also buy the handmade ceramic artefacts, like hand-painted vases and plates. 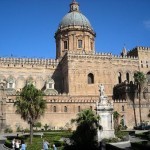 Our visit of Sicily’s capital starts at the Arabic-Norman cathedral (Maria Assunta Santissima) with its graves of Frederic the II and his mother Constance from Sicily. Also the church of Saint Joan dei lebbrosi and the Norman palace are part of the sightseeing tour. Last stop will be Monreale, approx. 7 km from Palermo, where we will visit an exceptionally impressive building, the cathedral of Monreale. In its interior you will find a immense surface decorated with stunning mosaics from the 12th century.

The tour takes us to the salt deposits situated in a natural park that belongs to the WWF and to a museum of salt-production in Trapani and in Marsala. Here you will have the possibility to taste the world famous Marsala wine. Next stop the temple of Segesta, which is particularly interesting for archeology lovers. On the same site you will also visit the Greek theatre that dates back to 300 b.c. The last stop of our tour will be the medieval town Erice.

Please consider the programme referred to here just as a basis, feel free to send us your own proposals and wishes or call us.
The tour can be programmed according to your personal requests.
You will receive a complete programme of your planned tour that includes also concrete prices.

Read also: Your first time in Sicily? What to do in Sicily