Sicily – land of orange diversity
The origin of the orange, the most common fruit in the world, is located in China and it was probably introduced to Europe in the 15th century. Nowadays, apart from Spain, also Sicily is famous for the vitamin-rich citrus fruit. Especially in the area of Mount Etna the oranges thrive particularly well, due to the fertile, volcanic soil and the high water content in the ground. On the island you will find different varieties, each with their own character.

Navelina – The “blonde” orange is rather large and slightly long. Its shell is thin to medium thick and has an intense orange-yellow colour. The fruit pulp is orange, moderately juicy (does not drip!) And due to its pleasantly sweet taste, the orange is very popular. It is what we first imagine when we think of an orange. It is ready to harvest at the end of October / beginning of November.

Tarocco – The yellow one with the red coloured pigments has an oval shape with a wide base. The reddish-coated skin is thin to medium-thick. The succulent Tarocco is a colour poem, yellow-orange, speckled with wonderful reddish pigments. The taste is medium sweet and slightly sour and due to its fine aromatic note it is excellent as freshly pressed juice. Available between the middle of December and the end of May. They can be stored for up to 2 months in cool rooms.

Sanguinello – The blood-red orange contains a pigment, which colours the fruit from yellow-orange to deep red. In part, even bright red streaks can be discovered on the outside. The orange is spherical and ripens relatively late, in the month of March. In Sicily you can find a delicious, wonderfully juicy and refreshing orange lemonade, made from the Sanguinello orange, recognisable by its red colour.

Moro – The ruby coloured orange is so red that its fruit pulp almost turns into black-violet, when it is ripe. The intense colour derives from its high content of anthocyanin (blue plant pigments). The skin has light wine-red shades, the taste is juicy sour. The Moro orange is on the market from December until the end of February. Because of its strong ripe taste, however, it is not very common.

Tip: If you are lucky and booked your holiday in Sicily during orange blossom season in late April; (Orange blossom = ital. Zagara), you should take a walk in the groves and let yourself be seduced by the unique fragrance. Joy is guaranteed!

The importance of the role of the orange in Sicily is particularly evident in the fact that it appears in many recipes, even a salad is dedicated to it. 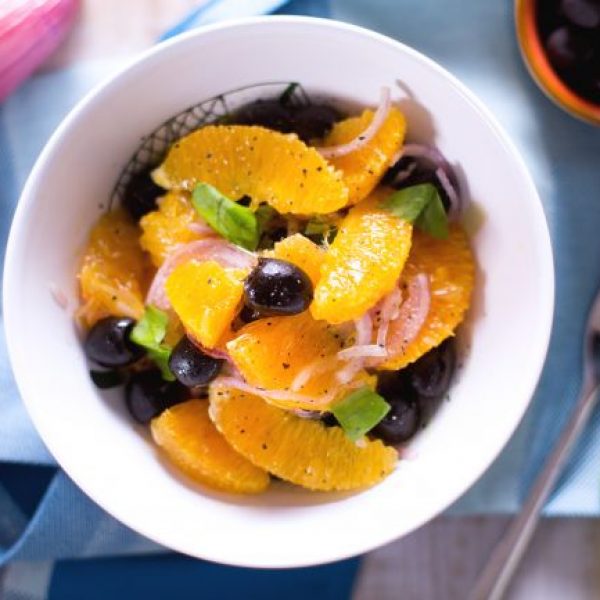 Preparation: Peel the onions and cut them into thin strips (or cut spring onion into rings), peel the oranges, remove the white skin if possible and cut into cubes (catch the juice that remains when cutting!), Quarter the olives, Add olive oil, salt and pepper and mint leaves. Ready to serve!