Home Blog A tour to the Alcantara Valley’s towns

If you come with us to discover the beautiful north side of Mt.Etna, you can not miss a tour to one of the towns that live in the shadow of this side, almost always snowy and much less steep than the other sides of the volcano. At the foot of the northern side of Etna, in fact, opens the valley of the river Alcantara with its famous “gorges” – but not only that. The Alcantara comes from the Nebrodi Mountains and flows like a torrent towards the valley.

Near Randazzo it receives the waters of the tributary river Flascio and changes direction by entering – with much slower course – in the sedimentary valley that ends near Giardini Naxos and Taormina. Near Castiglione the river gets into the Gurnes (small pools carved in the rock) that will turn, a few miles away, into the rocky canyon, or “gorges”, that everyone knows. Along this route there are several villages and towns and we would like to introduce you to some of them, less famous than Taormina, Giardini and Randazzo, but just as beautiful.

We begin the exploration of the valley following the course of river Alcantara. After leaving Randazzo it heads placidly through a fairly flat territory towards Mojo Alcantara. This tiny town of 730 inhabitants has a glorious past that dates back to 1602 and to the baronial family that founded it, all around the crater Mount Mojo. This is not a side crater of Etna as it emerges independently from the clay soil and does not seem connected to the greater volcano. It is however a sleeping volcano, on which nice orchards grow. Mojo is in fact the capital of Sicilian peaches and is home to the last major Country Fair in the eastern part of the island. Do not miss the beautiful wooden crucifix of the 17th century kept in the main church, called “u Signuruzzu”. Near Mojo stands the village of Malvagna, also of seventeenth-century feudal origin. The main monuments here are the frescoes of the Convent of the Minor Friars, the main church and the eighteenth-century church of San Marco. The Malabotta Natural Reserve belonging to Malvagna’s territory protects one of the oldest Sicilian woods left. 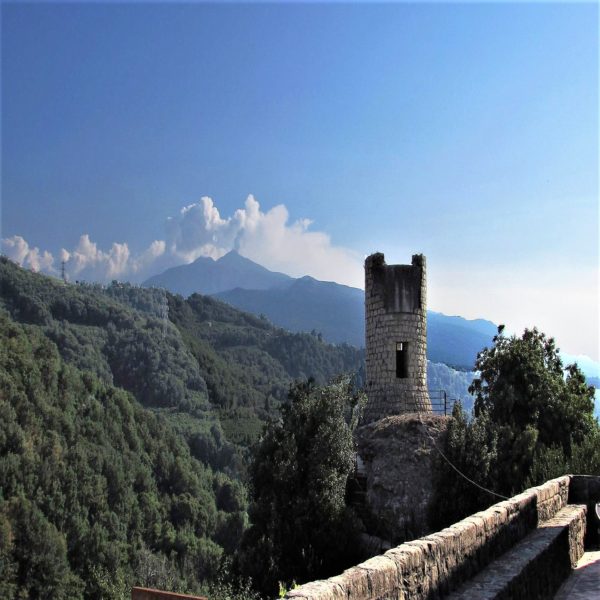 The river flows towards the promontory from which Castiglione di Sicilia overlooks the valley. Castiglione is a small town that keeps a medieval appearance despite the ancient origins dating back to the Romans and Arabs. Gathered around its splendid panoramic castle, it offers several interesting monuments: the defensive tower called U Cannizzu, the churches of the Madonna della Catena, Saints Peter and Paul and the small and beautiful Sant’Antonio with its baroque sandstone and lava façade, the very old churches of San Nicola – right on the bank of the river – Romanesque testimony that protects precious remains of frescoes, and the cubic church of Santa Domenica. The latter is an ancient church, built entirely with lava stone, reminiscent of Byzantine places of worship but which probably dates back to the Islamic age (10th century). Only recently it has been recovered after a long time of neglect. Right next to this church the Alcantara begins to descend through a series of “steps” and pools, the Gurnes, which introduce it between the rocky walls of the most famous canyon.

Motta Camastra, the village of the Gorges

Motta Camastra is a small town (less than 1000 inhabitants) spread between the hill on which stands the ancient medieval village and the valley where the most modern town has developed. Here you find the entrance to the famous Alcantara Gorges Regional Park that can be visited thanks to the trekking paths or by descending with the elevator that runs inside the “belly” of the rock to the bottom, where the river bed is located. The Gorges are equipped for tourist reception thanks to restaurants, shops, information points and souvenir sales centers. The most famous monument of Motta is its village, with its narrow streets and squares almost intact from the Middle Ages, and obviously the pride of the town is the delicious walnuts, main product of the place.

City “of water”, Francavilla is crossed by three rivers: the Alcantara, the San Paolo and the Zavianni torrent. A town of Greek origin, it lived its period of glory after the year 1000 when, at the behest of Count Roger, an important monastery was built here. Places of interest are the Convent of the Capuchin Fathers with its museum of rural history, the Antiquarium with the archaeological collections of the place, the Schisina Villages that is abandoned rural villages dating back to the 1930s. The board that manages the Alcantara Gorges Regional Park is located in Francavilla.  (photos by Grazia Musumeci)