We had announced it as the next big change in the schedule of guided tours on Mount Etna, starting from spring 2022. But the environment cannot wait, and neither can our guides who are fond of these woods and clean air! So the ecological tours will start, instead, much earlier. Already in this month (November 2021) it is possible to book your ecological half day trip on Etna with our new eco-sustainable vehicles. Because while the G20 talks about ecology, we are already making it!

Half day ecological trip on Etna

Etna guides cannot fail to love this volcano and its environment deeply. Which is why they were happy to equip themselves with the most modern and efficient electric vehicles, such as ecological jeeps. Powerful enough to tackle paths and woods, safe and clean in emissions, these vehicles have nothing to envy to old-fashioned jeeps. And they can tour the same paths. 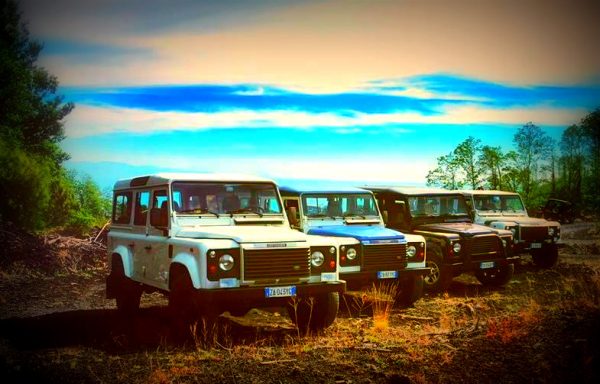 The guides will pick you up at your hotel, wherever you are in Taormina, Catania or along the Etna coast. You will then head to the great volcano, on a tested and fascinating path and even more beautiful if you tackle it with cars that do not pollute! It begins by climbing along the bends, among quiet mountain villages. Just outside Milo, in the territory of Fornazzo, the first stop will allow your guide to tell you a bit of the history of Etna. You then continue on to visit beautiful places such as Rifugio Citelli, surrounded by the Etna birches, or Ragabo pinewoods with the magnificent pine trees up to 15 meters high!

The next stop will be the grottos. Mount Etna is a territory rich in “flow” caves, that is, formed by the same flow of lava. Solidifying on the outside, the lava creates real tunnels which – once the eruption is over and the magma flow exhausted – remain hollow inside so anyone can get in. Some grottos are located several meters underground and you will descend with the right safety equipment. And always in the company of the guide. Finally, you will have lunch at Piano Provenzana. Then you will admire, in the early afternoon, the lava flows that destroyed this area in 2002.

As you can see, the tour ranges from the densely inhabited urban environment to the woods, from the pine forests to the lava desert up to the caves and high mountain shelters. The vehicles used are jeeps or all-terrain four-wheel drive vehicles. They are perfectly capable of adapting to any change in the terrain. The electric engine makes sure that whatever the power is, the polluting emissions will be zero.

You will be able to pass through wild and intact environments without the risk of ruining that same beautiful nature that you have come to admire. For this reason, the Eco Green Etna Tour is the ideal holiday . Walking times are respected, just like a petrol vehicle would do. It will face practically the same tour but with the added possibility of going into the woods or close to the grottos. Without fear of harmful emissions.

You will no longer have to wait for April to book your ecological tour on Etna. You can do it right now, by contacting the numbers of our guides, who already have the necessary ecological means. There is not just one “good season” to visit Etna … every time of the year is magical. In autumn, the bright colours of the leaves of the woods; in winter the expanses of snow and the small glaciers; in spring and summer the landscape full of flowers and wild animals.

And then there are the eruptions, which happen by surprise, creating wonderful shows above all this beautiful nature. Our electric vehicles will allow you to admire these events as well, approaching as far as allowed by safety measures, in full respect of the environment.

Ognina, Catania and its lava cliff

Autumn in Taormina, five things you can do

The best “autumn-colour routes” in Sicily