In February, the Etnean territory shines with lights and colours thanks to the Mardi Gras Carnivals. There are two important ones, here: Acireale and Misterbianco. They are different for the story and characteristics, but both celebrate the costumes and masks in a very artistic way. If you are in Catania’s area during the Carnival week, do not miss one or both shows. They are also another way to better understand other local masks: the masks of lava.

The Carnival of Acireale is one of the oldest in Sicily. It certainly derives from Roman times, though today it looks more like the tradition brought by the Spaniards in the 16th century. The Aragon tradition mixed with the local art of the papier-maché, creating big masks that make the Carnival floats today. The automatic movements and computerized led lights make them all real masterpieces.

The Carnival of Misterbianco  became famous much later. Although it also has ancient origins, it returned to the limelight in the mid-twentieth century. Today it is, with merit, one of the most beautiful in Sicily. Here the masks are part of a disguise (“the most beautiful costumes of Sicily”) and enhance a dress, a set of shapes or clothes that look like allegorical floats. These costumes imitate the dresses of the Brazilian Samba schools.

Even the town of Paternò has its own historical carnival, which however is struggling to establish itself in modern times. Anyway, it also provides for the construction of beautiful papier-maché masks. Both in Paternò and Acireale, then, masks are also created with flowers. 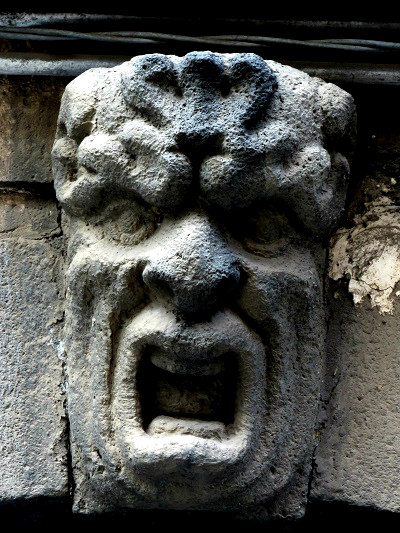 The mask is the soul of the carnival always, everywhere in the world. But here, in the Etnean area, it seems to derive from an older art linked to medieval superstition. Masks of lava. What the British call “gargoyls” and  appear only in castles, in Sicily – and in Catania in particular – are placed on the facades, on the entrance doors, under roofs or  balconies.

They have different functions: they can be gutters, lintels, balcony brackets or only decorative elements. They are masks carved in lava, with monstrous expressions, frightening features. In the past, they were used to “keep the evil away” or only to scare thieves and enemies. In the province of Catania it is not uncommon to find masks even on churches … in that eternal mix of sacred and profane.

The art of masks on Etna

The art of creating masks with volcanic materials is not rare at the foot of Etna. The artist Barbaro Messina from Paternò remains famous all over the world (with works also exhibited at the Louvre). But you can also admire amazing works in Zafferana Etnea, in an apparently abandoned land, dotted with lava masks and other beautiful sculptures. You can see it along the road that descends from Etna towards Catania, crossing the town.

Many tourists have seen the sculptors at work even during their trips to the Sapienza Refuge, where, 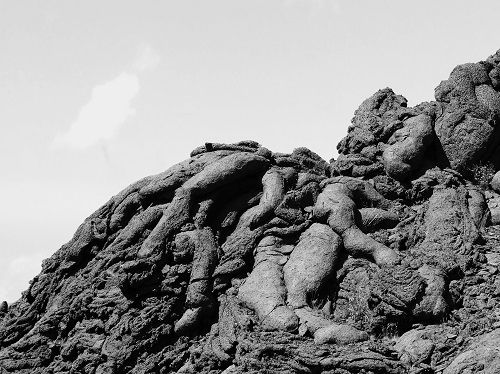 around the extinct cones of the Silvestri, there are often two skilled artists who create shapes in the lava under the eyes and the flashes of their cameras.

But the best sculptor of lava masks remains him, the volcano. Mount Etna. Just go to Sciara del Follone, on the northern side of the mountain, to find that incredible work of art that is Monte dei Morti (“the mount of dead”,photo on the side). These are actually ancient rope-shaped lava formations which, by solidifying, have assumed shapes that recall dozens of piled up corpses. A masterpiece of nature that has no equal.
(photo by Grazia Musumeci and – for the image of the Monte dei Morti – from the web, wikipedia)