Mount Etna is the one of the most popular tourist areas in Sicily, and it can be either hiked or driven up using suitable vehicles, and it is also a leading site of volcanic research. 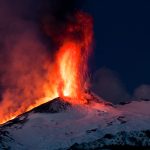 Mount Etna is also known as Mongibello which means “mountain-mountain”. The ancient Romans believed that Vulcan–the god of fire and metalworking–had his forge beneath Mount Etna and that this was the cause of its eruptions. The word “volcano” originates from his name.

The famous active volcano is surrounded by numerous communities, that, in the event of an eruption, are generally protected from lava flow using diversion tactics that include deposits, explosives and holes. Let´s find out 5 most interesting curiosities about Mount Etna

The lava flows around the base of Mount Etna have been dated back as far as 1,500 BC. This makes the volcano the longest running active volcano in the world today. Most of the eruptions are not violent in nature, but an exception to this rule occurred in 1669 when lava flows destroyed more than a dozen Sicilian villages.

At almost 11,000 feet, Mount Etna is also the tallest active volcano on the European continent. The actual height of the volcano is always changing due to its consistent eruptions, however, so an exact measurement of the summit is required every few years to document its actual height. The base of the volcano also has a circumference of more than 90 miles.

According to the Global Volcanism Institute, there have been more than 225 eruptions at Mount Etna, including 10 between 2001 and 2009.

Before 2001, Mount Etna erupted about once every 18 months. Since then, it has begun to erupt more frequently. Except for 2007, there has been at least one eruption every year.

Despite the danger of living near a volcano like Mount Etna, there have been relatively few casualties over the years because of its eruptions. Since records have been kept, only 77 known deaths have been directly attributed to the volcano. With the minerals the lava deposits into the soil, most Sicilians see Mount Etna as more of a blessing than anything.

While most Etna eruptions pose no danger to the surrounding area, they have the ability to cause serious damage. In 1669, the city of Catania at the base of the volcano was destroyed by lava. Catania was rebuilt only to be destroyed again by an earthquake in 1693