Mount Etna is a surprising volcano. This is the reason why it is privilege and fun to explore it and you should never miss the chance. We will take you to discover places, events and incredible evidences telling about a “living” mountain that changes everyday and offers unique shows.

The eruption that broke part of the northern side of Mt Etna (Etna North) between October 2002 and January 2003 is the best example. It was such a complete volcanic event that it was described as “the perfect eruption” by the surprised volcanologists, though they had been recording the signals for months. Preceded by a series of small earthquakes in the previous days, in the night between October 26th and 27th 2002 a few side craters suddenly opened on Mt Etna’s body. Fractures opened both on the southern and northern sides, but the Etna North ones were at a very low altitude.

They called it “button craters” because they opened all in a row like buttons on a shirt! From all those vents the lava came out and in a few hours it reached the ski resorts of Piano Provenzana. Shops and Info Points were immediately destroyed, and so were some hotels and restaurants around. But the nearby town of Linguaglossa was never in danger.

The earthquake of October 29

It was certainly more dangerous the earthquake that shook the mountain’s side on late morning of October 29th, 2002. The towns involved in the event were: Santa Venerina, Zafferana Etnea, Milo, Acireale and Giarre. There were no victims but some people were wounded and properties damage was considerable.

The 4.5 Richter earthquake was caused by the movement of the underground faults after the pressure of magma. After this main shaking, the eruption slowly came to an end on November 7th. But more volcanic events took place up to the end of the whole eruption on January 29th, 2003. In particular, the huge ash emission created clouds that reached the north African coast and caused the closure of Catania’s airport for weeks.

Mt Etna and the perfect eruption 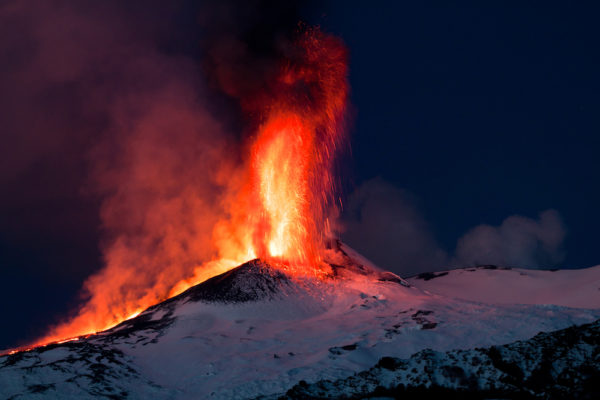 volcanic events you might imagine: earthquakes, lava, ash emissions, new vents. It also remained in history because of the great quantity of expelled material – about 160 million cubic meters. Evidences of this perfect event are still today the craters above Piano Provenzana.

You will explore them with our guides who will also take you to the underground grottos and to the best panoramic points. The tour will end with the visit to the Alcantara Gorges, just to stay on the subject of special volcanic events and lava streams, though these dating back to very ancient ages.