The prickly pear, as the word itself says, is not a Sicilian fruit. It was “discovered” by the first Europeans who colonized America – then mistakenly called India – and initially it was not thought at all as a food. It was exhibited in gardens and botanical parks as a curiosity to amaze guests or to make color. The habit of tasting its excellent fruit came later, between the 17th and 19th centuries, when the plant had found an ideal habitat in Southern Europe and in most of the North African countries.

Why then do we talk about “Sicilian secret”? Because Sicily is a producer of  four varieties of this plant – Valbelice, Val Torto, San Cono or dell’Etna and Bastadduna di Calatafimi – and because here they have developed several interesting ways to work and to enjoy its fruits. The fruits ripen at different times and require a lot of rain in the months immediately before flowering. They can be harvested as early as August but the sweetest are those that ripen between September and October. We want to give you a delightful little journey into the magical world of prickly pears and invite you to try them in all its possible versions.

How to peel the prickly pear

First of all, pay attention to how you handle the prickly pear cactus. Its thorns are barely visible, but once they are stuck in the flesh, it is very painful to get them out. Never handle a prickly pear without using thick gloves or do it by following the instructions we give you.

Hold the fruit with a salad pin or stick it with a fork. Then, with the knife, cut it on the long side and with the same blade complete the opening of the peel. At this point with another fork or another pin, block the exposed pulp and finish peeling. You will not have touched any thorn and you will not have brought any of them in contact with the pulp to eat. 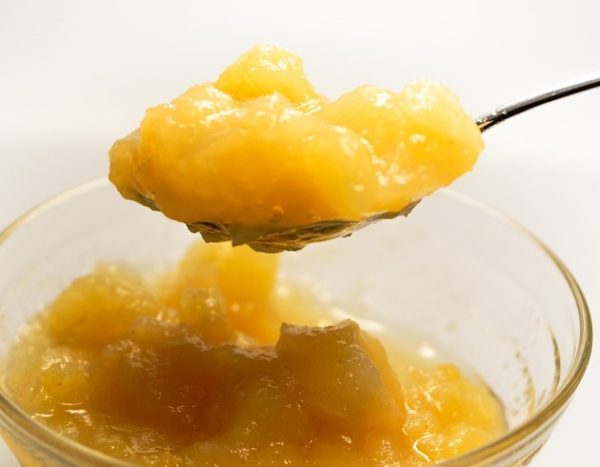 The peeled prickly pears can be eaten in bites and should be enjoyed with all the senses. Be careful not to eat too many because in the long run the seeds that they carry inside could cause irritation or intestinal blockages. With prickly pears you can prepare jams, juices, extracts and the most skilled ones can also pull an excellent summer granita out of this fruit.

In Sicily, prickly pear mustard is very common, though despite its name it has nothing to do with wine must jelly except for the same consistency. It is a sort of dessert that can have more or less softness. But did you know that even the large leaves – the so called “shovels” – of the prickly pear can be eaten, after having been freed from the thorns and treated? They become excellent both in brine and in jam form but are also good consumed as candied fruit.

A recipe based on prickly pear

To make mustard with prickly pears you must first get the prickly pears (about 1 kg) and then a lemon, corn starch, 8 cloves, half a teaspoon of cinnamon. You can also choose an almond grain to add on.

After having peeled the fruits as we have shown, continue cutting them into small pieces. Put them in the pot to boil together with the lemon juice and cloves. Add the cinnamon and cook for 15 minutes so that the fruits throw all the juice. At this point turn off the heat and let it cool down well.

Pour the thick liquid into a sieve, filtering as much as possible. Cook again, over low heat, until the new liquid has reduced. Add 100 g of cornstarch for every liter of juice obtained, mix well. Sift again and the result is put back to boil over medium heat. When it has reached the consistency of a cream put it in the molds, to dry for 4 or 5 days. Add almond grain if you like.