This article starts a new trip through the urban wild parks at the foot of Mount Etna. They are wild natural areas closed with walls or fences, with paths and comforts, for the people to enjoy them. So this will allow humans to walk in the green, go for picnics close to home, and allow the woods to be protected and remain as unique as the volcano is.

Monte Ceraulo Park is one of them. It rises within the territory of Mascalucia. In this area many extinct craters are called “monte” (mount) but Monte Ceraulo is not a crater. It is the result of the overlapping of many lava streams in ages. That is why it is a bit irregular, also in its paths, different from other parks such as Monte Serra, nearby. The population of Mascalucia wanted it so bad and obtained its opening in 2006. 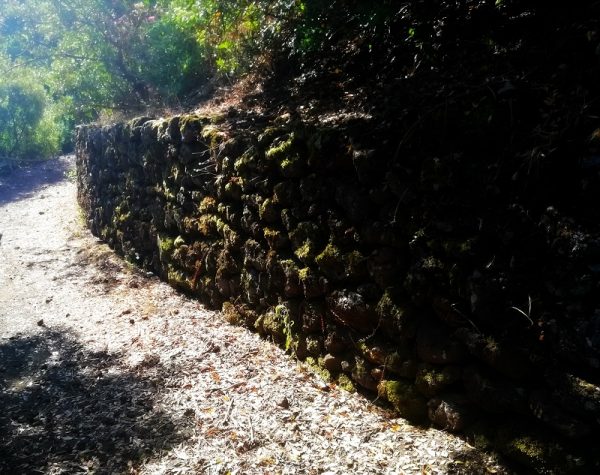 A rocky hill 520 meters asl, Monte Ceraulo is made of centuries of lava streams overlapping. The lava came from the eruptions of the neighbour Monte Arso crater – now extinct. These rocks now protect the descendants of the original Mount Etna Forest. We can see, today, what our ancestors saw centuries ago! Many of these plants have disappeared from the rest of the territory.

The vegetation is mainly made up of oaks and holm oaks, with various undergrowth plants and a fauna composed of birds and insects, including the rare Orussus Taorminensis. For those who love to observe plants and insects, Parco Monte Ceraulo is an irreplaceable naturalistic paradise. For those who just want to play sports, take a walk, or rest in the greenery, it’s like having a little bit of Etna at home! Unfortunately, since 2012 for “safety” reasons this beautiful urban park has been closed to the public.

It was only open for guided tours, by reservation, in certain months of the year. Currently, various committees of the population of Mascalucia and nearby Massannunziata are asking to make it accessible to everyone again.

What to do at Monte Ceraulo

In addition to walks and picnics, at Parco Monte Ceraulo you can take guided excursions by bicycle or on horseback, as well as naturalistic and scientific excursions. The ancient Villa Buscemi farmhouse with its beautiful millstone is also part of the perimeter of the park. Recovered in order to host conferences, events and even the library, this house also represents the typical fiefdom architecture of the Sicilian countryside. You can do birdwatching in the Park, admiring  blackcaps, wrens and even a few pairs of buzzards, birds of prey very common on the foothills of Etna.

What to see in the surroundings

About 6 minutes by car, just 30 minutes on foot, you can reach the beautiful sanctuary of Mompilieri. Here, a large outdoor space surrounds the new church and, above all, the ancient church submerged by lava. Today it is partially visible going down about ten meters underground. The rock walls of the eruption of 1669 cover it all but the ancient columns and the floor of the original church. They found it in the 18th century, bringing to light a part of the building that today is really worth visiting.

All around Parco Monte Ceraulo rise the town of Mascalucia and the nearby municipality of Massannunziata. The churches – especially the beautiful ones built in lava rock – are the main attraction of the two towns. Worth the visit: the main church of the Consolazione, St Vito, the Quattro Altarelli . Also very beautiful are the noble palaces and the ruins of Tower Ombra, a fourteenth-century bastion demolished by the eruption of 1573.

How to get to the Monte Ceraulo Park: from Catania along the E45 towards Misterbianco and exiting at San Giovanni Galermo, then continue on the Provincial 88 up to Mascalucia and Massannunziata. You can also arrive from Catania central station by taking the AST bus lines to Mascalucia. Obviously the closest airport is Catania. (photos G.Musumeci)