June 23rd, 2021, is a day not to be forgotten. Under the hood of yellow sirocco fog that almost completely hides it from view, the great Mount Etna unleashes a double eruption at the beginning and end of the day. Sudden spikes in values ??announce, in both cases at a short distance, the onset of paroxysms: one at dawn on June 23rd, the other at sunset. 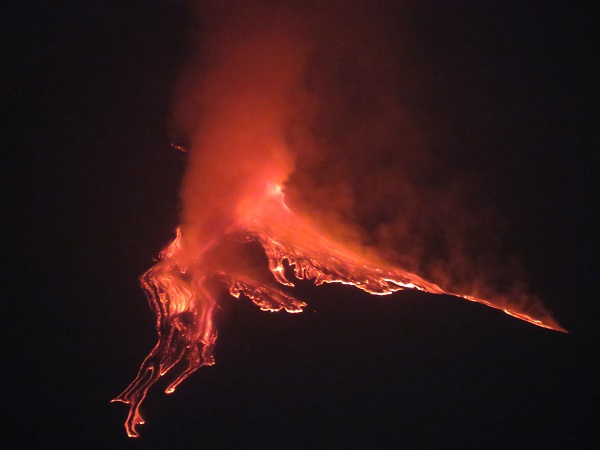 If the dawn turns red almost muted, with a fast eruption characterized by the usual cloud of ash and small lapilli, which fell on Riposto and Giarre, the sunset … is a completely different story! The tremor begins to rise already around 7pm, an hour later here is the lava fountains high in the sky. But we also see something “new”. A stream of lava that comes out of the base of the new gigantic South East cone.

In short, this flow becomes a real “firefall” which, together with two other arms – one directed to the north and one to the southwest – colours the sky in every shade of red! The paroxysmal thrust, as always, runs out in a short time. But the feeding of the lava goes on for a good part of the evening. Towards midnight, the lava streams lengthened considerably within Valle del Bove.

The lava arms emerge from new fractures that have opened the base of the cone. But some of these could instead be “old acquaintances”, such as the two small twin craters already noticed a few months ago. They were apparently covered by the continuous fallout of ash. Covered, perhaps, yes … but not extinguished. And last night they became protagonists in a decisive way. (the photos are by Grazia Musumeci)