The name will make you smile. It sounds like a cartoon character with a long, thick tongue, but behind this name there is a whole story – and a cultural background – of a small town that is very important for the economy of the Catania district area. Linguaglossa, in fact, is the “north gate” to Mount Etna. The northern access to the ski slopes, to the lava deserts, to the pine forests and to the extinct or active craters of our volcano. Linguaglossa is “Etna North”, a name and a guarantee.

History of a “tongue” of lava

The strange name of this place seems to derive from a large strip of lava that has always characterized its territory. Or, as some say, from the shape of the great pine forest that once covered the whole area like a huge “green tongue”. There is also another hypothesis: the locals spoke, from the beginning, a complicated and difficult language. The ancient Greeks defined “gloxa” or “glossa”  anything unclear and perhaps this was the ancient name of the village too, Glossa.

The Latinization of the name has not replaced the original Greek word, it simply added the term “Lingua” (tongue) to the pre-existing one. The result is a somewhat funny translation, as if the place were called “Tongue Language”. From this, however, we understand that Linguaglossa has very ancient origins, although only during the Norman domination it was established on the maps as a real town. 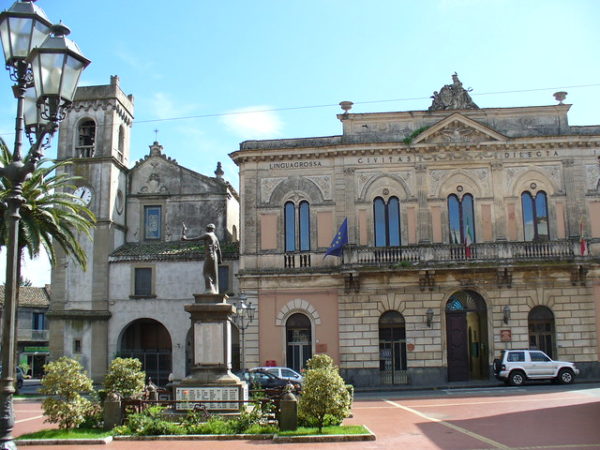 With the Norman conquerors, a large community of Lombard and Ligurian had arrived in Sicily. Many of these settlers were also expert woodcutters and knew the art of resin extraction. Given that, in 1100, the pine forest on the northern flank of Etna was still very large, a group of Genoese people  decided to settle close to these woods. They would work the resin extracted from the trunks. From them the town of Linguaglossa was born as we know it today.

In the course of centuries, ancient buildings and the routes of some roads have certainly been lost.  Mt. Etna has repeatedly damaged Linguaglossa with its earthquakes, and in 1169 almost completely destroyed it with an eruption. The lava -on that occasion- stopped for the miraculous intervention of St Egidius, who since then has been the protector of the town.

Today Linguaglossa lives on tourism, although the extraction of the resin is still a well known and practiced art. Thanks to its beautiful 16th century churches, convents and the proximity of the Alcantara Gorges, it attracts tourists from all over the world. Also famous for the delicacy of its agricultural products, the town produces excellent wines, a very high quality sausage and hazelnuts among the best in Sicily. Until not too long ago, the art industry of wood was also a flagship of the place. Today, Linguaglossa is an important stop for anyone who wants to go skiing on Etna.

The northern slope, in fact, keeps the snow for a long time, sometimes until June. And so the Etna Nord ski slopes, in Piano Provenzana, work for many months a year and the roads to reach these sports facilities all start from Linguaglossa. This has led to the flourishing of B&Bs, holiday farms  and restaurants. A few kilometers away from Linguaglossa, although it falls within the territory of the municipality of Castiglione, there is also the Il Picciolo golf club. This is a super-luxury structure for top-level tourism. At 13 km from the center of Linguaglossa, in about 20 minutes by car,  you can reach the Ragabo pinewood and the two shelters connected to it: Ragabo and Brunek.

How to get to Linguaglossa

By train: you will get off at the Taormina-Giardini station and take a taxi or an Interbus bus to Randazzo. If you want to arrive by car, on your own, follow the Messina-Catania highway exiting, in both directions, to Fiumefreddo. From here, along State Road 120, continue for about 9 km towards Randazzo and Linguaglossa.