In Sicily every city has a saint to pray for protection and hope. Catholic worship has thus replaced an ancient peasant paganism that was linked to gods and goddesses of the earth or the sea. The city of Messina differs a bit from tradition because it is directly voted to the Virgin Mary, both on the feast of June 3rd (Madonna della Lettera) and on the day of the Assumption, August 15th. The latter is certainly the most spectacular of the two.

The Vara, or the carriage of the Assumption 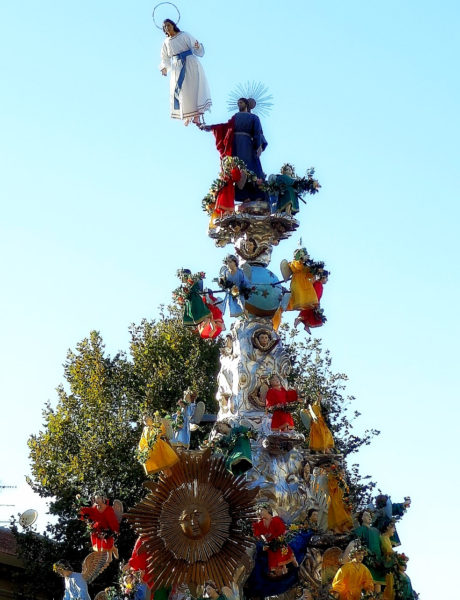 Tradition traces the history of the “vara” to the 12th century, after the Christian reconquest of Sicily by Count Roger the Norman. The entrance of the Count under the banner of the Virgin Mary and the submission of the pagan giants that thus became the symbols of the Roman Church (Mata) and of the Church of Constantinople (Grifone) are the first idea of a celebratory procession of the Virgin Assumed into Heaven.

The real “vara” comes later,  around the 16th century. Normally this word refers to a crystal case put on a carriage, long as a coffin (or “bara” in Italian), in which to place the statue or relics of the saint so to carry it in procession. But in honor of the sovereigns these cases were sometimes placed high up, to be clearly visible above the wings of the crowd.

The “vara” of the Assumption in Messina reached a considerable height over time, to the point that it could be climbed on by several people. Normally children, including infants, were hoisted up to be “offered”  to the Virgin. But a series of incidents over the centuries, with wounded and victims, led the city to replace the real people with statues.

The Feast of the Virgin Mary today

The carriage of the Virgin Mary is carried in procession on August 15th of each year. The structure, in wood decorated and enriched by dozens of statues, is 14 meters high and weighs 8 tons. It is pushed by groups of highly skilled devoutees who have to adjust the movements of this high tower which has no wheels but supports similar to those of the sledges.

In fact, the vara goes slipping through the city streets, either made of lava tiles or  asphalt. Slip is favoured by the tankers that wet the road surface before it and keep it constantly humid. On some occasions a mixture of soap and water is sprayed directly to make moving easier. Devoutees who move the carriage communicate with each other using a “mariners” language stuffed with words like “hawser, rudder, rowers”.

The itinerary starts from Piazza Castronovo and goes down Via Garibaldi, cutting the area of Giostra  to stop only in front of the Palace of Prefecture in Piazza Juvarra. The route then continues towards Via Boccetta where a stop is planned in order to watch the fireworks fired from the port. Then the procession goes down to the Town Hall where it meets the two submitted giants Meta and Grifone. The most evocative moment is that of the acrobatic “turn” that requires all the skill of the maneuverers to prevent the tower from collapsing on the people. Finally, here is the stop at the Bishop’s Palace and then return to the Cathedral. (photos: under the title by G.Musumeci – – in the article, by Effems)