A town and the volcano closely linked, for better or for worse, in life and death and in the return to life. Here is a summary of the history of Nicolosi and its “Monti Rossi” (Red Mountains), the cones that determined both the terrible eruption that upset this side of Etna and the natural beauty that we can admire today.

Like Zafferana, Bronte and Linguaglossa, Nicolosi also represents a “gateway” to the great mountain. In fact, from Nicolosi you climb along the southern side of the volcano and to this municipality also belong the tourist  facilities that gravitate around the cableway and  “Europe’s southernmost ski resorts”.

The land of the monks transformed by the lava

Nicolosi owes its origin and name to the monastery of St. Nicolò, a grandiose and powerful Benedictine community that was built on these hills in the 14th century (year 1359) around the refuge for elderly monks wanted by Queen Eleonora d’Angiò who died here in 1341. The village was built around the monastery and depended almost entirely on it. Unfortunately the cohabitation with the volcano proved to be very difficult.

A first eruption threatened the town in 1408. A second just over a century later (1536) -followed by an earthquake and two other eruptive events in the following ten years-  forced the monks to abandon the monastery and move to Catania. However, the town continued to develop until the great disaster occurred in 1669.

Preceded by a violent earthquake, on 8th March the land broke up just above Nicolosi and an eruption began which would last four months, ending on 11th July 1669. The lava destroyed the ancient feud of Mompilieri, the old monastery of St. Nicolò and reached Catania going to touch even the new Benedictine monastery, built by the monks who had fled from Nicolosi. Later,  the town was reborn on its own ashes, living on agriculture and then tourism, by providing visitors with routes and guides to climb to the top of Mt Etna.

What to see in Nicolosi 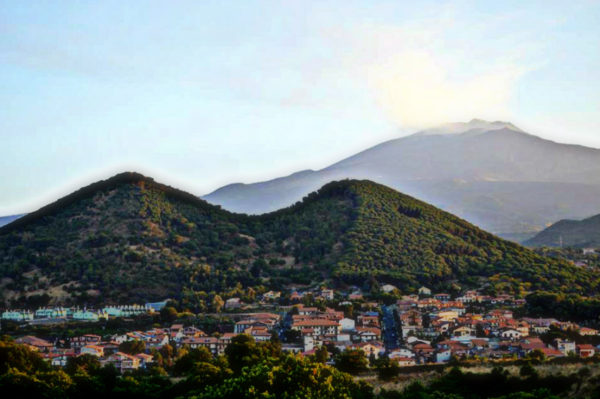 If you base yourself in Nicolosi for your holidays on Mt Etna, do not forget to admire this small town that looks clean, tidy, decorated in an “alpine” style and rich in parks and woods. Among the places to visit: the main church of the Holy Spirit, rebuilt in the 18th century in Baroque style; the church of the Madonna del Carmelo placed at the top of a panoramic stairway in the oldest part of the town; the remains of the Monastery of St. Nicolò which today is the seat of the Mt. Etna Regional Park Board.

More to see in Nicolosi: the interesting museum of rural civilization and the museum dedicated to Etna and its eruptions. Outside the town there are places of great interest: the church of Mompilieri which preserves, in the basement, the remains of the old building still submerged by the boulders of the ancient lava flow of 1669 and the pine forests of the Monti Rossi, a vast suburban park that offers relaxation and fresh air on summer days and places of leisure at any time.

This name – “red mountains” – clearly referred to the colour of the lava indicates the twin cones formed on the fracture which opened on the southern flank of Mt. Etna on 8th March 1669. Within four months the lava descended from an altitude of 850 meters above sea level to to the coast of Catania, destroying villages and countryside, burying the river Amenano and surrounding the Ursino Castle which at the time was facing the sea. The lava flow, 25 meters high, brought to surface 950 million cubic meters of material that forever changed the geography of the southern area of Mt. Etna.

Many people from Nicolosi who had sought refuge from the earthquake in the countryside had to flee again when the lava arrived, many lost homes, properties and relatives. For many years the Monti Rossi were also called “the mountains of the ruin” in memory of the ruin and despair they brought. Today, both covered with a wonderful pine forest, they are instead a place that welcomes families and groups looking for moments of relaxation in nature.  (photos: Giuseppe ME – above the title – and Nicolosietna)