It seems like a big eruption the one that started at dawn on May 30th from the summit of volcano Etna.  A “surprise” for everyone, even for the volcanologists who by now expected anomalous or lateral eruptions. In fact, however, the volcano is “exploiting” some of the fractures that opened last December 24th to emit the huge amount of lava that is pouring in these hours into the valley of Bove. 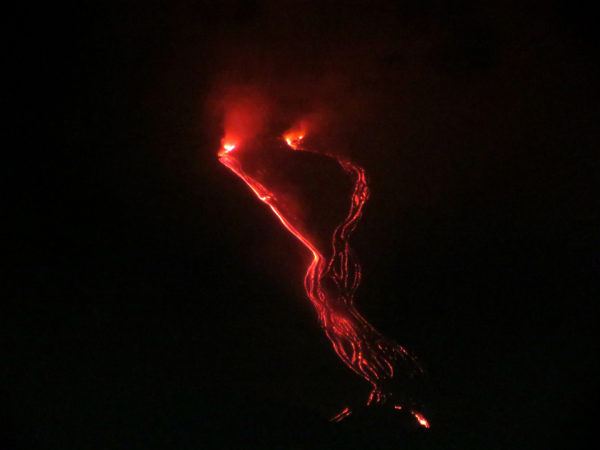 Etna is known to be unpredictable. But those who know it well, also know how to follow it. Dr Boris Behncke of the INGV of Catania explains: “The lava flows, well fed, originated from the base of the New South East Crater and are moving into the valley of Bove; a noisy Strombolian activity continues from the eruptive vents.” so far, then, nothing to worry about. But the too many fake news that follow the event do worry instead.

Dr. Behncke again: “The fact that there is now this new eruption in progress does not mean at all that now there will be earthquakes again as in December. Of course, we are in an area with a high seismic risk, but this is regardless of the eruptions of Etna. In some cases earthquakes continue even after the eruption begins but, at the moment, there is no sign of a new movement of this type. “ ( PHOTOS BY GRAZIA MUSUMECI)