Home Blog The challenge of the Montagnola

The name (Montagnola means “small mountain”) seems to indicate something small, and even looking at it from the base of the cableway it looks like just a small hill. But you must reach it and, above all, face it to understand that the Montagnola is not small nor simple at all. Instead, this gigantic hill that forms the particular profile of Etna from the south-eastern side is an important point of reference, one of the unmissable challenges for those who get to know this volcano up close.

Origins of the Montagnola

The Montagnola, that today rises quietly and majestically on the south-eastern side of Etna, started from a fracture generated in June 1763. The eruption of fire and ashes sprung from that original hole has built a real crater which, over the next two centuries, was gradually covered by ash, stones and other volcanic emissions. Here is the reason of its remarkable dimensions and its “pointed” shape that make it different from any other cone of Etna. 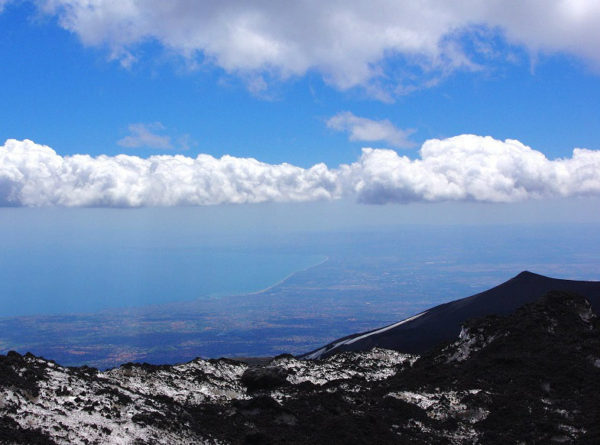 Not far from the base of the Montagnola, today, there is the landing place of the Etna cableway. Tourists visiting the craters can admire the magnitude of this volcanic formation since they leave the cabin. They will pass by on the minibuses that take them to the complex of the craters and, if they want, they can also stop and attempt the climb.

The Montagnola rises at an altitude of 2,600 meters, has very steep sides and it is possible to climb it – with the appropriate equipment that can be rented at the  cableway’s stop – through the paths traced by years of exploration. You need to be well trained to face the hard walk, but the prize is a breathtaking view of the entire eastern Sicilian coast, on the one hand, and the larger craters on the other. It is also interesting to observe the nature of the rocks that cover the Montagnola: sulfur, iron, basaltic volcanic bombs of the strangest forms.

For the most athletic – or the bravest – among you, a fabulous itinerary to try is that of the Canalone della Montagnola (the great trail). From the base of this cone, in fact, opens a “track” of black sand (of snow, in winter) that slides directly towards the Valle del Bove.

Being very steep, you tend to descend running at high speed but do it only if you are an expert climber. Beginners better go slow, struggling with the slope, but without doing crazy things. In any case, upon arrival, you will be in the wild heart of the Valle del Bove and admire one of the most beautiful landscapes of Sicily, where you can also rest after the reckless descent. (photos Grazia Musumeci)