Home Blog Timpa di Acireale, a walk on a fault

How many times have you heard of the famous “faults”, that is the portions of land – parts of our planet – that sliding on each other cause more or less powerful earthquakes? Sicily is a complicated and vast system of faults. They multiply around and above the volcano, Mt Etna, on the Ionian coast. But you could rarely recognize them by eye. Most of them run underground and can be seen only when, with an earthquake, the system breaks.

The Timpa of Acireale is a spectacular exception to the rule. It is part of a system of faults that connect the central crater of Etna to the large Iblean-Maltese fault that runs from Messina to the island of Malta. It was precisely this fault that generated the disastrous earthquake of 1693. Although covered by dozens of layers of ancient lava, it emerges from the sea right at the height of Acireale, taking the shape of the Timpa promontory. 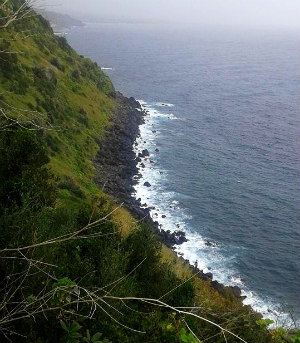 The portion of fault known as Timpa di Acireale goes from the village of Santa Caterina to the town  of Stazzo. Seen from the sea, you can guess the movement that led the fault to come out of water. You will also note the different lava flows that have covered it over time. Since 1999, the Oriented Natural Reserve of Timpa was established to protect the geological and natural wonders of the place.

The reserve, which belongs to the Legambiente headquarters in the site known as Fortezza del Tocco, explains to the tourists the local flora (watercress, sea fennel, wild fennel, broom, rock carnation, violets, mastic and above all the plant of caper, now endangered in many parts of Italy) and fauna. On the Timpa you can meet weasels, porcupines, rabbits, lizards, some types of turtle and a variety of birds such as kingfisher, common gull, hawk, buzzard, owl, hoopoe.

Natural paths and human constructions on the Timpa

The Timpa is a very touristic place. And not just for those who love biology and science. An ancient stone path – the Chiazzette – built by the Spaniards in the 17th century, zigzags down from the historic center of Acireale. It takes you to the seaside village of Santa Maria La Scala. Once it was used to transport goods to sea and fresh fish up to the city, today it is a tourist road but it is also used – in summer – by many locals that simply want to go to the beach.

The beaches of Santa Maria La Scala are stony, not all tourists love them. But they are also a guarantee of 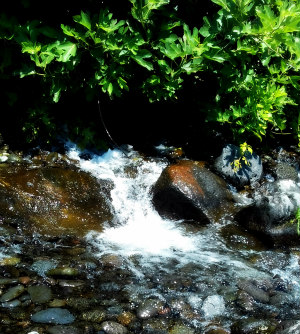 a very clean sea, thanks to the action of the micro organisms that live in the cliffs. The fishing village is still inhabited and still lives on fishing. It dates back to the 16th century and still has the ancient church located right in the square, facing the sea. At the end of the Chiazzette path there is an ancient water mill connected to the water springs which flow a few meters from the beach. They are also linked to the historical legend of the River Aci and Sea Goddess Galatea.

Other man-made paths on the Timpa are: Acquegrandi, dating back to the 18th century; Gazzena, already used in the 19th century; Old Railway, where you walk 3 km along disused tracks and through tunnels that date back to the 19th century and pass through the fault. In addition to the village of Santa Maria La Scala, which is certainly the most suggestive, are also villages of Timpa : Capomulini and Santa Caterina, in the south, and Santa Tecla and Stazzo, north of Acireale

Particular beauties to admire on the Timpa

There are many beauties and particularities along these tourist paths of the Timpa. Too many to list them all, but by relying on a good guide you can see several of them. At the end of the Acquegrandi path, for example, you can see volcanic rock formations called “crocodiles”, due to the rough shape that the stone assumes. From the sea, south of Santa Maria La Scala, you can see the columnar basalts of the Grotta delle Colombe.

Along the coast there are some medieval watchtowers: the Petra Sappa of Santa Maria La Scala, and the Garitta of Santa Tecla are notable examples. On the Chiazzette route you can admire the former Fortress of the Tocco (today the seat of Legambiente), right at the beginning of the route. There are also two small chapels along the descent.

An interesting curiosity: going towards the village of Santa Tecla, right at the point where the Timpa seems to move away from the sea for a few kilometers, you will notice orchards and citrus groves that literally rise below sea level! This is because, over the centuries, the lava flows that reached the coast -forming the strip of land on which Santa Tecla stands today- have in fact formed a dam. The dam has isolated part of the seabed of that time. Today, instead of that huge enclosed marine bay, the countryside blooms with the crops of the locals! (photo by Grazia Musumeci)