Home Blog The most beautiful lava shores in Sicily

Beaches are charming, all of them, all the time. Not just because they make us imagine summer, warm days, holidays, but also because they remind us of the hard work nature has been doing – during the centuries – to give us such a precious present. And if beaches mean all that, beaches made of lava rock are even more charming. They let us walk on materials that once used to be fire!

They have colours and perfumes that make them unique. The sea all around is often very clean, due to the action of many micro organisms and algae this kind of rock hosts. It is always a great experience to lie down and sunbathe on a lava shore. And here is a list of the most beautiful lava shores in Sicily.

From Aci Trezza to the city of Catania

Most of the lava beaches in Sicily are along the Catanese shore, at the foot of Mt Etna. But not all of them were produced by eruptions of the big volcano. Though their lava rocks look very much like Mt Etna’s, they belong – especially between Aci Trezza and Aci Castello – to a much older volcano.Maybe an ancestor of Mt Etna itself. The beaches of Aci Trezza and Aci Castello are rocky and inaccessible. In the summer, in fact, wooden walkways and bathing establishments are installed to guarantee bathers comfort. 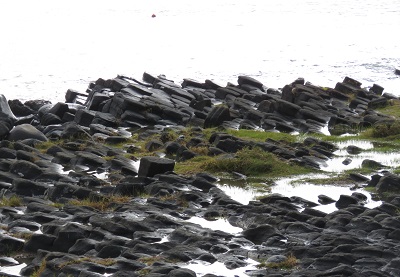 But it is wonderful to admire the Faraglioni and the Columnal Basalts that emerge from this sea. They look more like the lava rocks of the Alcantara Gorges than those of Etna. They are perhaps ancient eruptions of a more ancient volcano than Etna, an underwater one, that is now extinct.  The beach of the Columnal Basalts in Aci Trezza is not an area open to everyone. It is in fact a natural monument that must be protected from the masses of swimmers and can only be admired  at a safe distance.

One of the most fascinating lava beaches is the one located at the base of the Norman Castle of Aci Castello. The sea and the wind, over the centuries, have smoothed the lava cliff forming an enormous platform. Inside this lava platform,  erosion has dug several natural pools in which the water carried by the waves of the sea remains for days, before evaporating.

The cliff of Aci Castello, certainly formed by ancient lava from Mt Etna, goes up to Catania. The beaches of Ognina and San Giovanni Li Cuti are also lava shores, and very close to the buildings of the city center. San Giovanni Li Cuti is located in front of an old fishing village. It consists of a fine black sand also obtained from lava.

Certainly fascinating is the lava beach of Santa Maria La Scala, a hamlet of Acireale. If the city centre is located several meters above, on the plateau overlooking the sea, the small fishing village has always occupied a strip of land at the foot of the Timpa. The Timpa is a portion of emerged tectonic fault  covered over the centuries by the lava of ancient eruptions of Mt.Etna.

The erosion and landslides gradually formed the dozens of small rocky  black coves that open among the wild Mediterranean scrub that is protected by the Timpa Natural Reserve. The most romantic beach is “Mulino” (Mill). It is located a few meters from an old water mill that uses a fresh water spring flowing right on the beach. Unfortunately, although beautiful, this cove is closed to bathing due to the danger of landslides. A ban on access that locals and tourists rarely respect, though!

Visible only from the sea and accessible only to users of the Camping above, is the lava beach of Grotta delle Colombe. The cave from which it takes its name no longer exists, demolished by a marine storm. Until the 1970s one could  still admire one of its remains, “the Fist Rock”. But this too has now collapsed in the abysses. The beauty of the rocks that can still be seen between the waves and the wild vegetation, remains anyway.

A lava beach at the foot of Taormina

A tongue of black rock abruptly interrupts the almost continuous line of white beaches that from Riposto reach Messina. This is the Capo Schisò, in Giardini Naxos (Messina). Just at the foot of Taormina, so, an “anomalous” cliff testifies to an ancient eruption generated  perhaps more than 3000 years ago. It came from little volcano Mojo, after forming the famous Alcantara Gorges.

This lava is similar to that of Mt Etna but not identical. In fact, Mt. Mojo  is not part of the body of the great  volcano. The cliffs of Schisò are very beautiful but not very accessible. Those who bathe here organize by themselves, without real beaches.

The lava shores of the smaller islands

The “seven sisters”, the Aeolian Islands, are all of volcanic origin. Beyond Stromboli and Vulcano, which are still active, the other cones have been extinct for centuries. But the residues of their eruptions still form  some beautiful beaches today. The beaches of the Aeolian Islands are almost all black in colour, formed by large pebbles or rocks. Real sand is rarely found.

The most beautiful beaches, according to the taste of many travelers, are: the Black Sands of Vulcano, the coves of Piscità in Stromboli, White Beaches of Lipari (formed by the pumice lava stone) and Pollara, in Salina. The latter -formed by steep rock walls – was made famous by Massimo Troisi’s film Il Postino.

The island of Pantelleria (Trapani) holds the record of spectacular lava beaches. Here, every ravine and every cove, every beach and every cliff  is unique. Sateria beach, linked to the myth of Ulysses’ journey. Zotta beach, very difficult to reach but formed by red lava rocks of rare beauty. Suakl, a rocky pool-shaped beach where you can immerse yourself while the sun sets right in front of you. Gadir beach, a rocky lava shore among whose rocks shine springs of warm water. (photos by GRAZIA MUSUMECI)