If we can experience the feeling of having a picnic in a crater, today, or eating and walking at the foot of beautiful pine trees inside a natural basin, this is due to a terrible event of the 17th century. The side eruption of Monti Rossi hit the place and the people, detroying many lives.

It seems hard, now, to imagine the fear and death (they are also called “Mountains of Ruin”) of those days, as we walk along the pinewood’s green paths, breathing cool mountain air. The Monti Rossi, or Nicolosi Pinewood, are a natural, well kept oasis and a very important local landmark on the southern side of Etna.

How the Monti Rossi were born

The Monti Rossi craters were born, one after the other, in March 1669 after a hard series of earthquakes. This is how started the most frightening side eruption of Mt Etna. In a few months – since it all ended in July – the lava came down for 15 km and reached Catania and its coast. It deleted towns, villages and the local economy of the country.

This was the eruption that deleted also the Nicito Lake and forced the river Amenano underground. Today, in fact, you can only see its water in the fountain of the same name in Duomo square in Catania. The same lava partly destroyed the Benedictine Monastery which had been built one hundred years before by monks from Nicolosi! 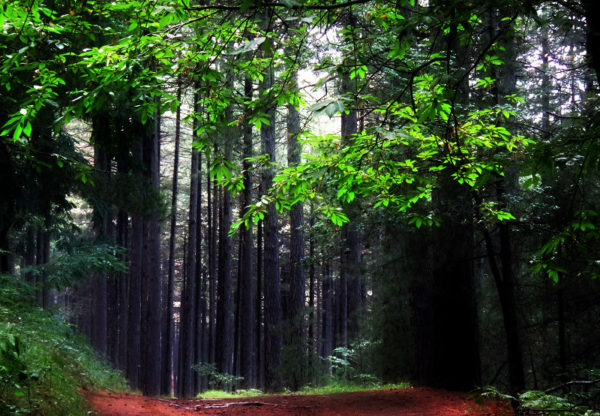 The name Monti Rossi (Red Mountains) has two possible meanings. One coming from the dialect “munti grossi” meaning “big”. The other coming from the colour of the lava, that had been shining in the night for 4 months, back then. The lavic ground of these craters is very fertile, so. This is why the wild vegetation could cover them immediately, as soon as the eruption ended.

The Monti Rossi today are “exhausted”, that is, they won’t erupt anymore. And the pine forest that has transformed them over the centuries is proof of this. Today the pine forest is a place organized to be used by inhabitants and tourists. Picnic areas, paths, trekking paths, mountain bike trails, but also archery, bars, barbecue areas and a beautiful Adventure Park have made us forget – but not too much – the drama from which all this arose.

The Adventure Park of the Monti Rossi di Nicolosi offers a series of playful attractions. They are mounted, in an absolutely eco friendly way, on the tall pines that cover the two craters. In total there are seven adventure courses: three for adults, three for children aged 5 to 12 and one for the very young ones. Before entering at any level, the Park provides the appropriate safety equipment (helmet, harnesses, …). Possibility of having guides and instructors by your side.

In addition to adventure trails, the park allows you to celebrate birthdays, to make educational excursions and organizes artistic and scientific workshops for the kids. The park is located in via Goethe in Nicolosi. The single entry ticket is 4 Euros. But to be able to use multiple routes, you need to pay a sort of cumulative ticket. It costs from 12 to 25 Euros – depending on the number of people, the type of route and the duration.

The Park is open from 10am until sunset, every day from July to September. From May to July it opens only on weekends. In winter,  it is required to book in advance ([email protected] or 388/7553812) as the park remains officially closed in the cold season.