Go climbing alone the mountains is not recommended and very dangerous, even more so when the mountain in question is a volcano. Mt. Etna is a very high volcano (over 3.300 m), therefore you will find the high mountain climate on it, the same you could also meet on the Alps, especially in winter or during summer storms. So you need to know how and where to “take refuge” in case of need. Make ALWAYS sure that you face Etna with an expert guide by your side, anyway you better know that in case of emergency here are the most famous mountain huts of the volcano.

You will surely have heard of two or three of the Etna shelters. They are actually the most famous, real tourist resorts rather than mountain huts, now organized to accommodate the large crowds. One is Rifugio Sapienza (Southern Etna, territory of Nicolosi): dedicated to a war hero and brother of a member of the local Alpine Club, the Giovannino Sapienza Shelter was built in 1947 and today has over 50 beds, a restaurant, several shops and acts as base for those who take the nearby Etna Cableway.

On the opposite side, in the territory of Linguaglossa (Northern Etna), stands the Brunek Shelter. Delightful with its alpine style, the lava stone and wood building also known as Ragabo accommodates up to 12 people and is located in the center of a beautiful pine forest.

Panoramic and overlooking the east coast, instead, in the territory of Sant’Alfio rises Rifugio Citelli, a hut dedicated to the Alpine Club member Salvatore Citelli. Surrounded by Etna’s typical birches and a picnic area, it has smaller dimensions and fewer services than the other two. 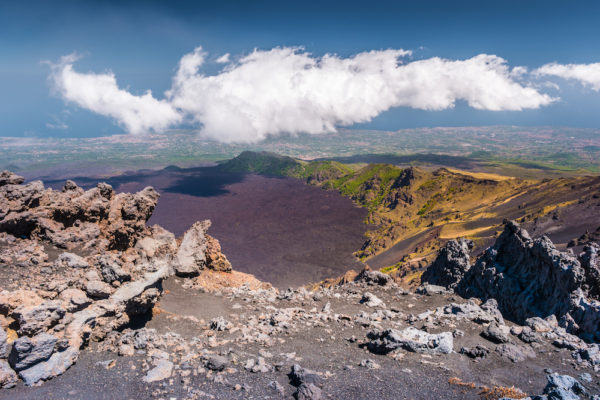 If you climb Mt.Etna from the west side, you can rest at the Galvarina Shelter, a characteristic volcanic hut built with lava stone. Few beds but drinking water and fireplace always provided. Always on the western side, a few kms away from Maletto, you will find Rifugio Monte Scavo, also here with water and fireplace available. Casa La Nave is a modern-style shelter, with a bivouac room but it is also used as a resting place by shepherds and cowherds.

The shelters of Monte Spagnolo, Rifugio Santa Maria and Rifugio Monte Spagnolo are slightly less well cared for. Although they are delicious with their alpine architecture, they are often abandoned and therefore not well supplied and unsafe. On the north side of the volcano, you will find Rifugio Pirao, a former shepherds’ hut now restored and ready to welcome tourists and hikers.

In the Randazzo area there is Saletti Shelter, well supplied and very well inserted in the surrounding pine forest. The romantic Timparossa is part of the municipality of Castiglione, surrounded by trees whose leaves turn  gold and red in autumn.

We have named only some of Mt Etna’s huts. There are many others, smaller or less cared for. And there are some that have entered history, now, because they were destroyed by eruptions and lava flows. Above all, Rifugio Gino Menza, which stood at the centre of the Valle del Bove surrounded by a landscape of very high rocks and luxuriant wild vegetation. The 1992 eruption overwhelmed and completely erased it. Even Torre del Filosofo, located near the main craters of the volcano, was destroyed during the 2002 eruption.