Mount Etna is a young volcano, we could say “teenager”. Its life has been still short, according to the canons of volcanology. Yet despite its recent history it already has lived important events. Perhaps the most important of all was the collapsing of the Great Volcano which partially generated the current shape of Etna. That is, the shape that can be admired in particular from the eastern side.

Etna is not actually a volcano but a “volcanic system”. A system that developed in different times and ways. Generated by a series of underwater eruptions over 600,000 years ago, it has filled with its materials and bulk what was once a huge gulf. Under those waters the two great masses of the African and Eurasian plaques were already clashing.

The first shape of Mt. Etna was that of a three-pointed volcano, the Trifoglietto. A volcano of violent and unpredictable explosions, very dangerous for the wildlife of the then “island”. One of the three peaks was Monte Calanna. This volcano soon stopped its activity and today emerges in part from a corner of Valley del Bove. The Trifoglietto was active about 80,000 years ago.

Once the activity of this apparatus was exhausted, the magma dug new ducts towards the west forming a new eruptive system, Trifoglietto II. This volcano was in activity until about 55,000 years ago. Then it collapsed and blocked the volcanic ducts. This made the eruptions stop for ages.

After a 20,000-year quiet spell, the lava found a new path to the surface. It opened a new crater, the powerful eruptions of which continued for years. Soon it built a large summit, all around. Given the ellipse shape of the central caldera, we remember this by the name of Elliptical Crater. The Elliptical became one of the highest volcanoes in history, reaching 4000 meters in height. If it had 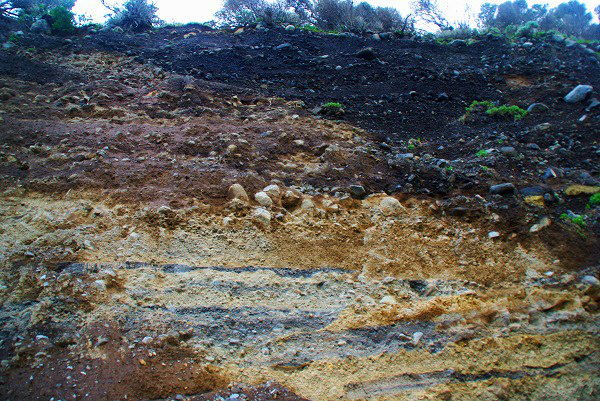 been seen then, Etna would have appeared perfectly triangular and with only one crater on the pointed top.

Although this is only a hypothesis, carried out by the German volcanologist Sartorius Von Waltershausen, some findings suggest that a Great Volcano really existed. Its collapse around 15,000 years ago could be the cause of a series of terrible landslides that split the eastern flank. This is how the Valley del Bove formed. A long trail of debris, in fact, makes the ridge on which the town of Milo stands and goes up to the coast. A gigantic fan that only makes one imagine the vastness of this collapse.

If you walk under the Praiola escarpment, near Riposto, you will better understand the great  event. A very high wall, the Chiancone, traps rocks and sediments of ancient soils in a crust of lava, which gradually crumbles forming the stony beach at its foot. Many of these stones are remnants of the Great Volcano. Even the walls of the Alcantara Gorges speak to us of this apparatus. They are in fact the result of a large lateral eruption produced by one of its vents.

After the collapsing of the Elliptical and the formation of the Valley del Bove, volcanic activity has stabilized for a very long time. The summit called Mongibello was for centuries the only crater of Etna. Only over the past three centuries  new craters have sprung up all around it . There are five at the moment.

This suggests that the lava is still “uneasy” and is looking for further ways out. Perhaps to the west, as shown by the latest eruptions inside the Voragine (2019-2020). Or even to the north, as the movement of the Pernicana fault in Linguaglossa tells. The truth is that Etna is still undergoing transformation and will always give us unpredictable, beautiful  – and terrible – fire shows.