In these hot summer days, nothing is better than an excursion to one of the most beautiful – and cool – places of Etna. A morning, or a one-day trip, at the Refuge Citelli on the north side of the volcano will make your day.
Led by a good guide, who maybe will take you to your destination with an equipped off-road vehicle, you can bring with you the necessary for a picnic. Or just plan an excursion at altitude. The Citelli Refuge is a nice place to stop and rest. But it is also the starting point for some of the most beautiful excursions in the Etna area. That’s why it’s worth choosing it as a summer destination.

Citelli, a gift to the mountain 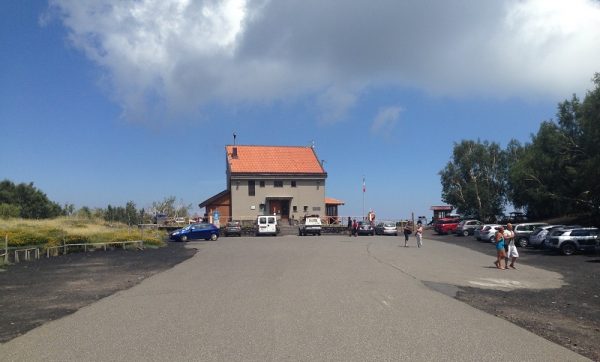 The Salvatore Citelli refuge proudly bears the name of a medicine doctor from Catania, a mountain lover. In 1934 he bought the land for the construction of this reception facility. He did it in the name of the Alpine Club and of all those who loved Etna. The refuge was built between 1935 and 1936 . It was entrusted to the custody of the mountain guide Peppino Strano, from Zafferana. In 1975, the refuge was abandoned. It was recovered ten years later and passed to the care of the municipality of Sant’Alfio, in whose perimeter it rises.

The refuge has a small bar-restaurant where tourists can eat. It also has rooms in which to stop for the night. With 21 beds and 4 bathrooms, it can accommodate up to 36 people (prices, from 35 to 60 Euros per night with reservation). In addition it is always open for passing hikers who stop only for a sandwich or to use the toilet. One side of the refuge overlooks the valley below from a balcony. On the front, however, a large square is surrounded by pine and birch trees of Etna.

You can get to the Citelli refuge only to admire the view, while enjoying a padded sandwich sitting in the picnic area. Or you can have an ice cream with a panoramic view all around. But if you love trekking and adventure, Citelli is the starting point for a series of beautiful excursions to do in the surroundings.

It starts from Citelli to go along the path that leads to the Serracozzo cave. The path starts from the refuge and goes into the birch woods until it comes out on the edge of Valle del Bove (north-east side). From there it then goes up for a few meters until it enters the cave.

Another itinerary is Serra delle Concazze a climb along the lava of 1928 which destroyed Mascali. Panoramic points over the coast and an average difficulty. An easier excursion is the one that goes from Citelli to the Sartorius Mountains, but also Grotta dei Ladroni is only 30 minutes away on an easy descent. The hike that takes you to Pineta Cubania after 9 km is longer and more tiring.

Useful information on the refuge

SEASON: it is always possible to go up to Citelli and enjoy a relaxing morning among the birches. But best to avoid the winter season, unless you are equipped to deal with the deep snow and ice on the roads. Autumn and spring are the best seasons for hiking.

HOW TO GET THERE: go up from Zafferana Etnea, passing the town of Milo and reaching Fornazzo. Here, the well-marked Mareneve road starts from the square, leading to the crossroads for Citelli and Piano Provenzana. It can also be reached from the Messina side, via the A18 motorway to Catania. Exit at Fiumefreddo and follow the signs for Linguaglossa. From here, go up towards Etna Nord and follow the signs for Brunek, Piano Provenzana and Citelli.