Mount Etna show continues! The eruption that began on St.Lucy’s Night 13 December 2020, in the summit area of the volcano does not seem to have respite yet. The experts had sensed it in the previous days, despite the many variations that occurred.

After a short period of calm and decline in parameters, on December 21 the volcano made a surprise paroxysm, emitting a very high plume of steam and ash. It was also photographed by high-altitude airliners. This was the start of a series of events that spanned a 24 hour period. 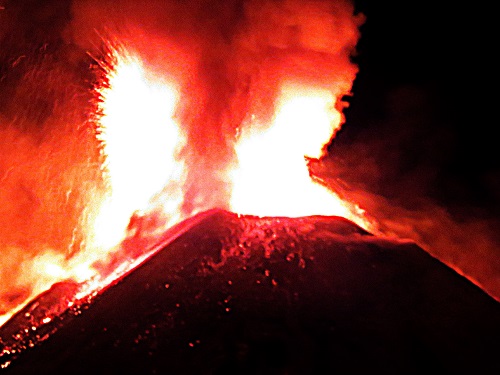 Cloudy and rainy weather prevented us from understanding what was going on, although volcanologists checked it all with webcam and infrared data. But around 3.30am on December 22, just before dawn, the volcano’s activity experienced a significant surge.

High lava fountains have ripped open the so-called “Sella crater”, set between the SEC and NSEC cones. The explosions pushed a large amount of lava material, setting off three flows: one headed west, one south-east and the third north-east. The last two are currently downhill among the snows of the Valle del Bove.

The best climatic conditions made it possible to admire the show that dyed the last hours of the night red and welcomed the sun with rivers of fire still smoking.

What awaits us in the future 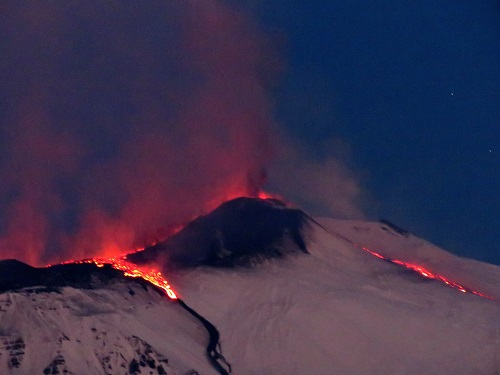 Although the data seem to be falling again, it is not excluded that Etna could give new
surprises, as it entered a new phase of its life. Volcanologists tend not to deny anything and not to overdo the predictions. On the other hand with this volcano every day is as the first day of a whole era, all to be discovered. What will future eruptions be like? Just wait to figure it out. And in the meantime, enjoy the show. (all photos by Grazia Musumeci)