Maletto is small and lovely. Just like … a strawberry! In fact this is the town of strawberries, the best in Italy! They cultivate them here on the rich and fertile soil of Mt Etna which gives the product a high and protected quality.

Maletto was named after the noble man who founded it, back in the 13th century: Manfredi Maletta. He was a relative of the Swabian emperor Frederick 2. Manfredi built the castle that used to stand here, on top of Maletto’s hill. Today you can only see its ruins. The village started to grow during the 15th century, as soon as the Spadafora family took possession of the property.  They kept on ruling the place till the Union of Italy in 1860.

Maletto today is an agrigultural town. It has a weird municipality. It is surrounded by the territory of another municipality, Bronte. The only small point “free” is on Mt Etna’s western side but it borders 9 more municipalities! Maletto is a “prisoner” of many other realities but it can be still different and unique. Not only because of the strawberries.

In the territory of Maletto you can admire some water springs called Favare (from Arabic “al fawra”). A large number of creeks fill the lava plain while running to join the river Simeto. They are what is left of an ancient river that was submerged in lava during an eruption of Mt Etna. 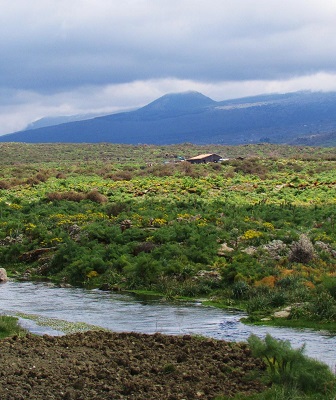 The lava had also created a dam that today keeps lake Gurrida. And the lake also gives birth to a few of these creeks. In the point where its water regularly overflows there are the Balze Falls. The natural show of the Favare is even more beautiful in late spring, as the mountain snows melt. The beauty of these creeks and of their shores full of flowers is unique.

What to see in Maletto

The centre of Maletto is small and narrow, easily accessible on foot, although many streets have steep climbs. In the village you can admire some ancient churches. San Michele (16th century) which houses a beautiful baroque altarpiece, Sant’Antonio da Padova (1785) with works by Bagnasco, the nineteenth-century San Giuseppe and Sacratissimi Cuori di Gesù e Maria . The latter is the small town’s main church.

Little remains of the castle of Manfredi Maletta today. To admire at least the foundations of the central tower and the stairs that still lead to it, you need to get to the highest point of the town and climb more. The view you will enjoy from above gives an idea of the strategic importance of this fortress.
In Maletto there is also a small but interesting archaeological museum. Since 1952, the Salvo Nibali Museum has provided evidence of the history of the place and its territory, as well as educational and multimedial workshops.

The ghost of the Bandit Princess

According to legend, Maletto was born thanks to the courage of a princess named Maretta. Strong, beautiful but austere woman, she did not allow herself to be conquered by any man. She fought her battles against the bullies by hiding on the hill where the town was later founded.

Indeed, according to the popular saying, it was the poor people who sought protection from her to found the inhabited centre. The bandit princess Maretta disappeared one day. Nobody knows where or how she died. But everyone is sure to have seen her ghost still wandering today around the castle ruins. Sometimes in the streets of the oldest part of Maletto as well.

Maletto strawberries are known throughout Italy and are a highly appreciated slowfood brand. The tradition, it seems, started from a strawberry selected in France in the late 19th century. The variety Madame Moutot was  brought to the property of the Castle of Nelson, a few kilometers away from Maletto, in 1906.

Thanks to the fertile and rich soil of Etna, the French strawberry found its ideal place in Maletto. It is still cultivated here, although now you can also find it in the Syracuse area and in the greenhouses of Ragusa. The Maletto strawberry is beautiful, sweet and very delicate.

Inside it has little but delicious pulp, therefore it has an “empty heart”, so it must be consumed quickly. However, the flavour is excellent, very delicate with a never excessive sour note. In June, the town celebrates its product with the Strawberry Festival, during which visitors can taste a 1000 kg strawberry cake!

From Mt Etna to Syracuse

Catania in the autumn