Over the centuries, the territory of Mount Etna has unfortunately lost almost every trace of Arab domination. A not very long historical period (it lasted about two centuries) which left wonderful works of art and engineering in a large part of Sicily. These works are still there, in western Sicily, but here on the east coast – due to invasions, earthquakes and eruptions – much has been lost. More open to Europe, eastern Sicily has “willingly” forgotten its Arab past. But something remains and has arrived up to modern days. Like the Arab Bread recipe. And the ways in which you eat it.

If you go to the public park of Acireale, the famous Villa Belvedere Park overlooking the Ionian coast, you will find among palm trees and bushes a spectacular Arab building. This is the open air Cine-Theatre Eden. Despite the wonderfully oriental style, this building dates back to the 20th century, to those 1920s full of Arab nostalgia. This is one of the few examples that recalls the very ancient traces of Islamic domination in this part of Sicily, but it is not authentic. 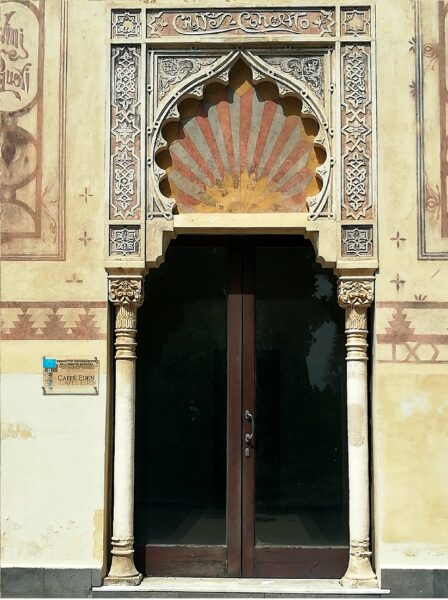 On the other hand, some true Arab traces can be found in the Syracuse area, in the territory between Noto and Ragusa and near Enna. These are mostly Islamic burials and pottery shards. The richest heritage of the Arabs for eastern Sicily is certainly the language. Many terms that are still used at the foot of Mount Etna derive from North Africa. Some examples: “mischinu” -from the Arabic “miskin”- means “poor”; “taliari” comes from the Arabic “talaya” meaning to look. But also the historical name of Etna, Mongibello, comes from the Arabic “jebel” (mountain). And there are many surnames of the people of Etna that recall the Arabic language: Vadalà, Fragalà, Alì, Musumeci. Many recipes of Etna cuisine are also Arab.

The ingredients to prepare a good Arab Bread are:

Once the ingredients are available, here’s how to proceed: on the flour arranged in a fountain, pour the water with the previously dissolved yeast inside. Knead until everything is smooth, then add a teaspoon of salt. Knead again and cover with a towel and let it rise for another two hours. Then form balls and bake them in the oven – preheated to 240°C (preferably ventilated) for no more than 15 minutes.

How to eat Arabic Bread

Arab Bread is an excellent accompaniment for all the delicacies of the Sicilian table. Excellent with salame, ham and cheeses, it can be stuffed with sausage, olives, onion and cheese! Cut it into small pieces and eat it with baked aubergine salad (another typical Arab recipe), with soups like the very Arab “macco beans soup”.

Where to taste it

The best Arab Bread is in Palermo and its province. But even Catania offers something good to those who love this recipe. Taste the Arab Bread in the street food areas of the historic center, for example, together with the famous horse meat the Etna people love so much. Excellent bakeries that can make some good Arabic Bread are also in Zafferana, Milo and Linguaglossa. But in general, all the small villages of Etna know how to turn bread into a wonderful taste adventure. Just ask for it! (the main photo’s courtesy Giallozafferano.it)