Home Blog Mt Etna, 10 reasons to visit and love it

Do not be surprised if Mt Etna is considered as female, in Sicily. For the local people, in fact, the volcano is a mother and for those who respect it this mountain can also become a lover ! It is hard to find someone who cannot have one reason to come and visit Etna, but if you still have some doubts … here are ten reasons to overcome them.

You are visiting a volcano, so you will certainly wish to admire an eruption. We cannot say when and how Mt Etna will start its show, but if you are there when it happens go climb with a good guide by your side, and go by night. You will enjoy such great emotions that no word could tell.

Snow even in May

Mt Etna is the highest volcano in Europe (over 3.300 metres) and during winter it is covered with snow. Both wind and eruptions often move the volcanic ashes over the snow so it will look like it has all melted. But the snow remains under the ash “coat”, instead, and this keeps it for a long long time, even up to the beginning of May, on the northern side. 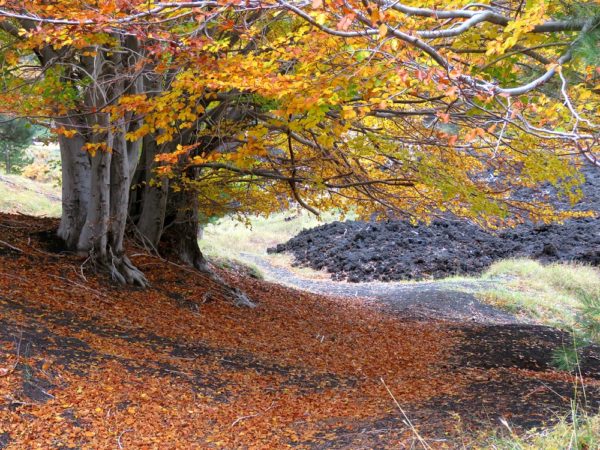 Be it the Linguaglossa pinewood, the chestnut trees in Zafferana, the pinewoods of Nicolosi or the broom woods of Bronte, Etna is green everywhere and protected by the Park of Etna Regional Board. In these woods you might spend the spring mornings but also find shelter from the hot summer days.

In autumn the chestnuts, the holm oaks and the birch trees of the volcano create fabulous colour contrasts. When the leaves turn yellow  Etna is covered with a golden mantle that includes shades of orange, light brown, dark red in a feast of visual sensations that attracts many onlookers between October and November.

Sports on a volcano

Mt Etna is the best place for doing many sports. You can take advantage of its shady sides for your mountain bike ascents and descents, or its steep canyons for skiing and snowboarding in the winter. You can practice rock climbing on the walls of the Valle del Bove and there are no limits for trekking and running at any altitude.

The northeastern flank of Etna is an endless expanse of vineyards. In fact, some of the best wine brands in Italy are produced here: Etna Rosso, Nerello di Mascali, Solicchiata just to name three. In addition to the view, the wineries open to tourists with tastings and guided visits to the beautiful nineteenth-century farmhouses surrounded by vines in all their beauty. Don’t miss the chance!

Apples, strawberries and much more

In addition to wine, the volcano is the dispenser of many genuine and delicious products. The apples of Etna, which are grown in Milo, are absolute quality. And so are Maletto’s strawberries, the pistachios of Bronte, oranges on the southern flank, lemons and olive trees. Try some new tropical specialties that  have been finding here excellent adaptations, for some years now, such as avocados, kiwi and bananas.

The panoramic views that Mt Etna offers are breathtaking. You already see them as you climb to the top, from every bend, especially on the eastern and northern sides. Have you ever tried to ski down a snowy slope having in front of you the expanse of a shimmering sea ? Have you ever seen the huge cone of shadow of a volcano covering half Sicily? Try it! It only happens here.

If you cannot get to the central craters of the volcano, due to physical problems, lack of time or just because an eruption is taking place and it is forbidden to go near it … go visit the Silvestri Craters, on the southern flank, a few steps away from Rifugio Sapienza. Ample parking, possibility of eating at the local restaurants, and an easy climb on three small extinct craters that however reflect – in a small part – the show that you would see on the top.

The devotion of the people of Etna is another reason why you should come to know this magnificent volcano. You find it expressed in the many sanctuaries dedicated “to the Virgin who stopped the lava”, in the architecture of the lava stone altars that dot the streets. But devotion is not only religious. There is a sort of “pagan” ritual dedicated to the volcano: to leave a table set with a bottle of wine on it, and the door open, when the lava threatens one’s home is an ancient rite. You invite the volcano to drink “as a good friend” in order to soothe his anger. Most of the time … believe it or not … it works, and the lava stops!

What are you waiting for? Book a tour on Mount Etna